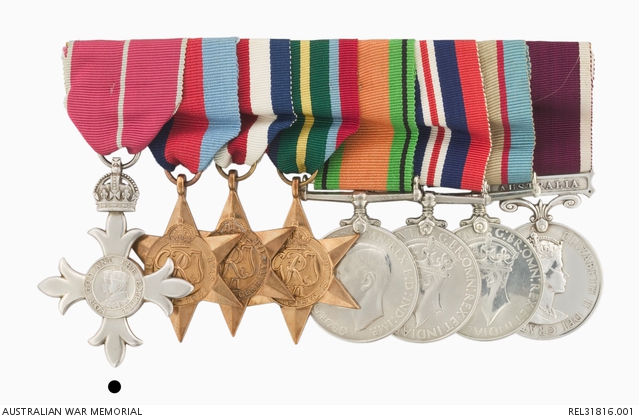 Member of the Order of the British Empire (Military Division). Unnamed as issued.

Associated with the service of Warrant Officer Leslie Baich, MBE. On 9 June 1955 he made a Member of the Order of the British Empire (Military Division) for his high standard of general military conduct and continued efforts as part of 10 Western Australian Mounted Infantry. The citation reads as follows: ‘Warrant Officer Baich has performed the duties of Regimental Quartermaster Sergeant with the 10th Western Australian Mounted Infantry since 5th September, 1952. During this period he has discharged his duties in a most satisfactory manner and has maintained the high standards of accuracy and attention to detail required in the handling of stores and accounting documentation commensurate with his rank. During this period he has performed his duties without the supervision or assistance of a Commissioned Quartermaster and has on numerous occasions successfully initiated details of planning normally undertaken by a commissioned officer. In addition the lack of a posted technical Quartermaster Sergeant has caused him to carry out the full duties and responsibilities of this position – a task made more difficult by the technical nature of the dispersed squadrons of this regiment. Warrant Officer Baich has been extremely loyal and helpful to his superior officers at all times and has maintained in the highest degree the traditions of the service.’ Leslie (Les) Baich, born on 29 August 1921 in Marrickville, NSW, was the oldest child of Alexander and Edith Baich. Upon his mother’s death in 1934 Leslie and his siblings, Alexander and Edith, were orphaned. The family was separated, with Alexander and Edith going to live with a relative while Les moved in with family friends, the Cross family, and completed his education at the Dulwich Hill Community School. On 31 January 1940 Baich enlisted as an aircraftman in the RAAF with the service number 8575. He underwent aircrew training at several Australian mainland units, including 1 Engineering School, Ascot Vale, 2 Elementary Flying Training School, Archerfield, 23 Squadron, Archerfield, 2 Aircraft Depot, Richmond, 3 Initial Training School, Kingaroy, 5 Elementary Flying Training School, Narromine, 3 Wireless and Gunnery School, Maryborough and Air Gunnery School, West Sale. Despite several attempts to qualify as a pilot, Baich eventually graduated as an air gunner before proceeding on overseas service. He left Melbourne on 28 April 1944 and arrived in the United Kingdom on 13 June 1944 where he was posted to 27 Operational Training Unit, Lichfield, 51 Base, Swinderby and 5 Lancaster Finishing School at Syerston. In 1945, Baich commenced operations as an air gunner on Lancasters. He flew with 467 and 463 RAAF bomber squadrons, and was promoted to warrant officer class two in September 1945. Returning to Australia in November 1945, he was discharged on 8 February 1946. Shortly after leaving the RAAF, Baich enlisted as NX501269 in the AIF on 9 March 1946 and served with 1 Signal Training Battalion. He later became part of the Interim Army and served as NP32133 with the School of Armour. He eventually received the service number 21723 in the Australian Regular Army and served with 4/19 Prince of Wales Light Horse. He was promoted to warrant officer class one in October 1963. After being discharged from the Army in 1966, Baich became a recluse and did not have any contact with his family. He died in August 2001.