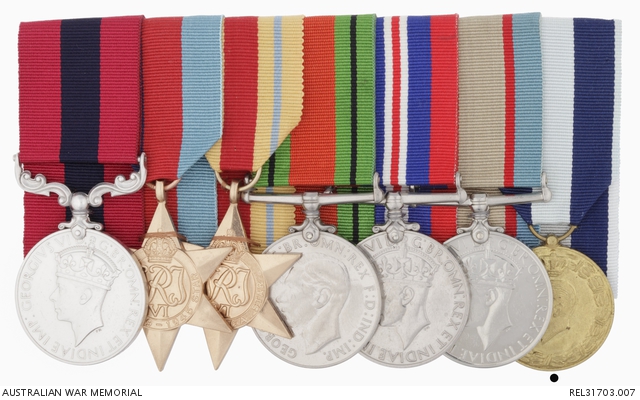 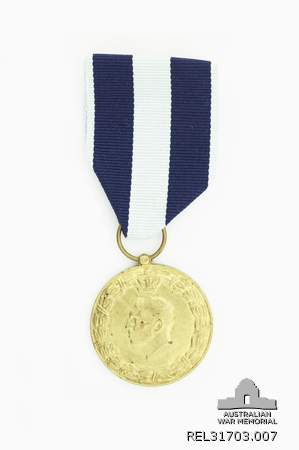 Greek War Medal 1940-41. Unnamed as issued. On the obverse is the head of King George II of Greece, within a laurel wreath which is joined at the top by a crown. The reverse contains raised Greek lettering which reads '1940-41 EPIRUS ALBANIA MACEDONIA THRACE CRETE'. The ribbon, which attaches to a ring suspender, is of dark blue with a broad central stripe in light blue and narrow edges of the same colour.

Oliver Zachariah Neall was born at Lake Mundi, Victoria, in 1908. He was a farmer in the Warrnambool area before enlisting in the AIF in December 1939, becoming Private VX9024 in 2/8 Infantry Battalion. The unit embarked aboard HMAT Y5 ('Dunera') in April 1940, for service in the Middle East. Neall saw action in 2/8 Battalion's engagements at Bardia and Derna, and was awarded the Distinguished Conduct Medal for his gallantry in destroying Italian tanks during the Australian attack on the strongpoint of Fort Pilastrino, Tobruk on 21 January 1941. He then participated in the ill-fated campaigns in Greece and Crete, and further distinguished himself by using a donkey to assist wounded men during the lengthy withdrawal from Mount Olympus. After 2/8 Battalion returned from the Middle East in March 1942, it spent twelve months as part of the garrison defending Darwin, and remained in Australia until late 1944. During this period, Neall was granted a commission and married Miss Golda Ellis, a 'Cheer-Up Society' girl from South Australia. Owing to his deteriorating health, he did not go to New Guinea with the rest of his unit in late 1944, and was still in Australia when the war ended. He was discharged with the rank of lieutenant in January 1946, but was not fit enough to resume farming, becoming instead a joiner in Adelaide. 'Ozzie' Neall died at Gilles Plains, South Australia, in February 1999.