The only good German is a dead German... 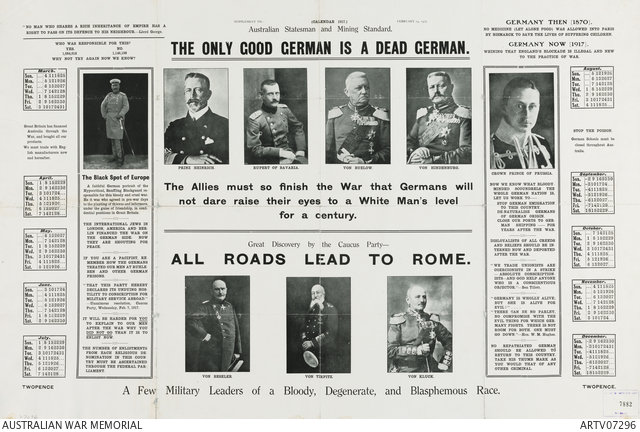 A supplement to the Australia Statesman and Mining Standard issue of 15 February 1917. It is an anti-German propaganda pamphlet loosely disguised as a poster calendar for March - December 1917 which could be purchased for 'Twopence'. It calls for the Allies to finish the war by smashing the Germans so they can never cause conflict again. It includes several short articles about and photographs of German officials and officers and quotations from Australian Parliamentarians.

The Australian Statesman and Mining Standard was owned and edited by journalist and publisher Frank Critchley Parker (1862 - 1944) between 1914 - 1917. He was a passionate pro conscriptionist who used his publication to attack anti-conscriptionists and Irish Catholics. Throughout the war he published anti- German and pro-British propaganda as patriotic pamphlets written by himself and others. So fervent were his attacks that the publication was successfully sued for libel by two senators and there were calls to hold a Royal Commission to investigate the publication, its distribution, and finance by the Federal Labour party.