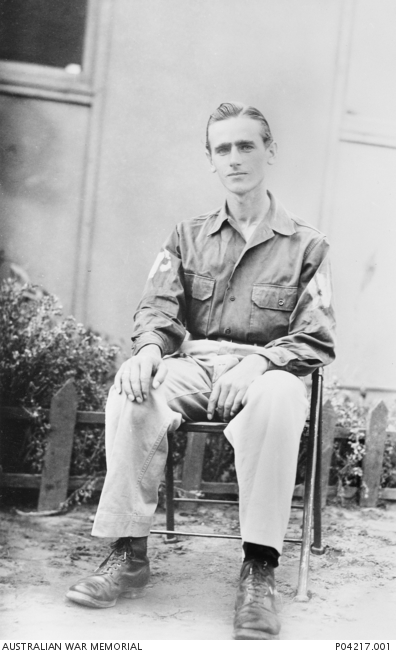 Informal portrait of Heinrich Saenger, a German Prisoner of War at Camp Cooke, California. Born in Hessen, Germany, on 29 July 1915, Saenger was a fitter and turner by trade who was drafted to work in Kiel, north Germany. Shortly after marrying his sweetheart, Lotti, in early 1942, he was conscripted to join the Germany Army. He served as a mechanical engineer on the Russian front, and in late 1942 was deployed to serve in the Greek campaign and North Africa, where he was captured by the Allies on 13 May 1943. Saenger was interned as a prisoner of war (POW) at Camp Cooke, California, where he performed general maintenance work. During his captivity Saenger carved and painted an elaborate chess set to mark his wife's 25th Birthday. The set took nine months to complete, and the box featured a painted message from Saenger to his wife Lotti: 'Take this game as a symbol that even in my heaviest day of my prisoner-ship you were always close by.' He was transferred to a camp in England for about six months before being repatriated to Germany in October 1946. Saenger and his family subsequently migrated to Australia in October 1953, and he was naturalised in 1958. (The chess set is held at REL31833.001-3)