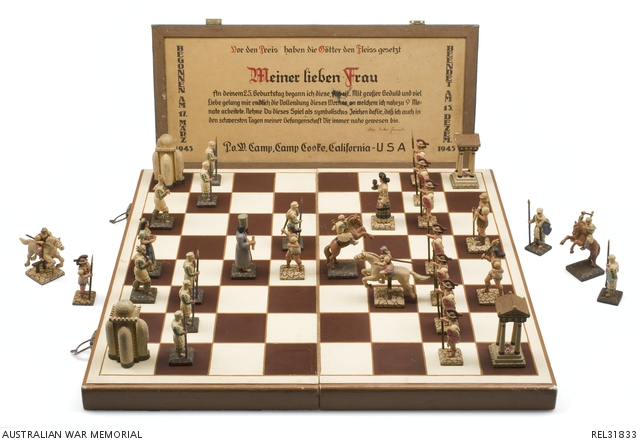 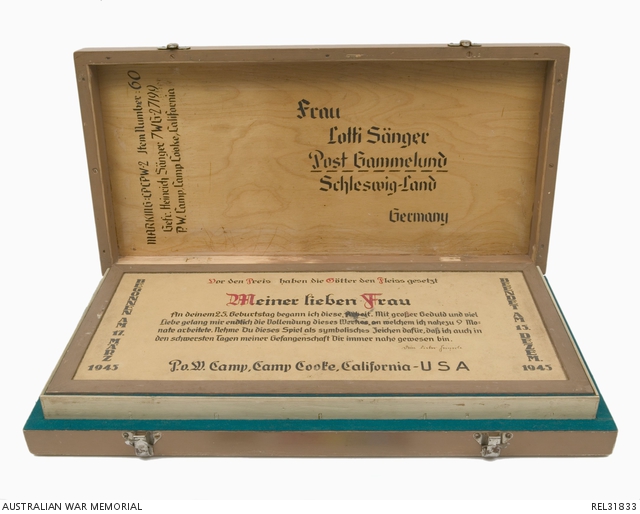 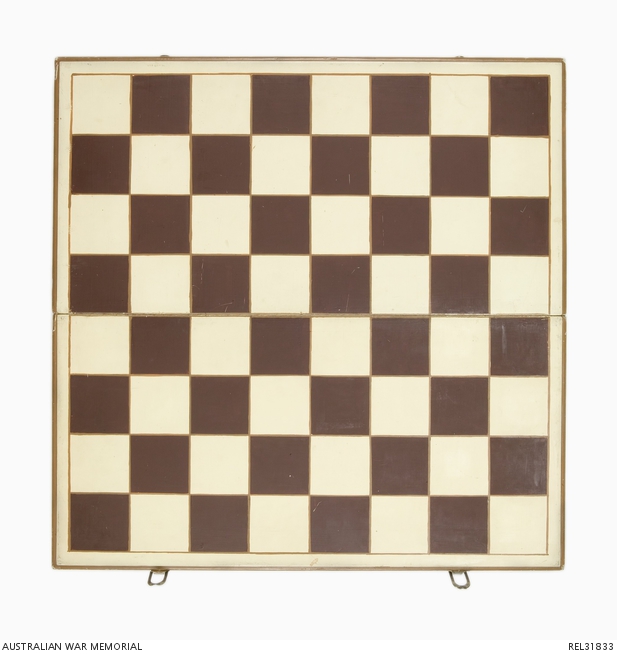 Handmade chess board and pieces with a canvas carry bag. The chess board is in the form of a wooden box with two hinges at the back to allow the lid to open 180 degrees to form a flat board. There are two chromed metal clasps at the front to fasten the box when closed. 64 chess squares are painted in cream and brown on the top and bottom sections of the box. The outside walls of the box are painted a light brown.

The inside of the lid has been stencilled in black ink with the address 'Frau Lotti Sänger Post Gammelund Schleswig-land Germany'. Written vertically along the proper right side is the return address 'MARKING: CPCPW-2 Item Number: 60 Gefr: Heinrich Sänger 7 WG-27199 P.W. Camp, Camp Cooke, California'.

The bottom section houses a painted pine box with a green felt-lined lid. The box is divided into 32 compartments which hold the chess pieces. These compartments, lined with felt, have been tailored to fit each piece with small sections cut out for protrusions such as spears, tails and torches. The bottom of the box bears the same addresses as that on the chess board with the addition of the line 'G.P.O. Box 20 New York NY USA' to the return address.

The lid, originally attached to the pine box with two hinges, is stencilled with the words 'BEGONNEN AM 17. MÄRZ 1945' down one side and 'BEENDET AM 15. DEZEM. 1945'. This translates as 'Begun on 17 March 1945', and 'Finished on 15 December 1945'. The centre section contains the message 'Vor den Preis haben die Götter den Fleiss gesetzt Meiner lieben Frau An deinem 25. Geburtstag begann ich diese Arbeit Mit großer geduld und viel Liebe gelang mir endlich die Vollendung dieses Werkes an welchem ich nahezu 9 Monate arbeitete. Nehme Du dieses Spiel als symbolisches zeichen dafur, daß ich auch in den schwersten Tagen meiner Gefangenschaft Dir immer nahe gewesen bin. P.O.W. Camp, Camp Cooke, California- U S A.'. This translates as 'The Gods have placed diligence before the prize. My Dear Wife, I began this work on your 25th Birthday. With much patience and much love, I finally succeeded in completing this work on which I laboured for nearly 9 months. Take this game as a symbol that even on the most difficult days of my imprisonment, I always came closer to you. Your dear Heinerle.'.

The chess pieces are elaborately carved and painted to represent the forces of ancient Greece and Persia, showing the traditional costume or architectural style of each nation. The Greek pieces have red embellishments and a light coloured base. The Persian pieces have blue embellishments and a dark coloured base. The kings carry a sword and scroll and the queens bear food and drink. The two Greek rooks are in the form of a columned building and the Persian rooks are a domed building. The four bishops carry a flaming torch. The knights ride charging horses with the two Greek knights bearing lances, while the two Persian knights brandish axes. The pawns stand to attention with long spears and shields. The base of each piece is lined with green felt.

The carry bag is a khaki canvas kit bag shaped to fit the chess board and fastened by a thick brass zipper around one end. This zipper is reinforced at either end with a leather patch. Around the middle are two webbing straps which are stitched into position at the back. These are fastened and adjusted by two metal buckles at the front. The top of the case has a thick webbing strap stitched to it. Both the front and back are stencilled in white paint with 'Home address: Frau Lotti Sänger Post Gammelund Schleswig-Land Germany' in the middle, and down the side with 'MARKING: CPCPW-2 Item Number 60 Gefr: Heinrich Sänger 7WG-27199 P.W.Camp, Camp Cooke, California'. Faintly visible underneath is the further line 'GPO Box 20 New York NY USA'. The front also has the remnants of a brown paper label from the German Red Cross. The inside of the case is lined with khaki cotton drill.

Heinrich Sänger was born in Bad Hersfeld, Hessen, Germany, in July 1915. A fitter and turner by trade he was drafted to work in Kiel at the beginning of the Second World War. Here he met a young woman named Lotti and they were married in 1942. He was called up for Army service early in 1942 and initially served on the Russian Front. In late 1942, after a brief leave in October, he fought in the Greek campaign and was then sent to North Africa, serving in a supporting mechanical capacity.

Sänger was captured by Allied forces on 13 May 1943 and was sent to the United States as a prisoner of war. He was held at Camp Cooke, California until mid 1946. At the camp he was assigned the number 7WG-27199 and undertook maintenance work. During his imprisonment Sänger also occupied himself by making things such as this chess set for his wife's 25th birthday; it took nine months to complete.

Lotti had been evacuated earlier in the war to the region of Schleswig (part of the northern German state of Schleswig-Holstein). In June or July 1946 Sänger was sent to a transit camp in England and was repatriated to Germany in late November 1946. In October 1953 the family emigrated to Australia where Heinrich, with the surname anglicised to 'Saenger', worked as a fitter and turner with International Harvesters and then with the Ford company in Geelong, Victoria. He was naturalized in October 1958.