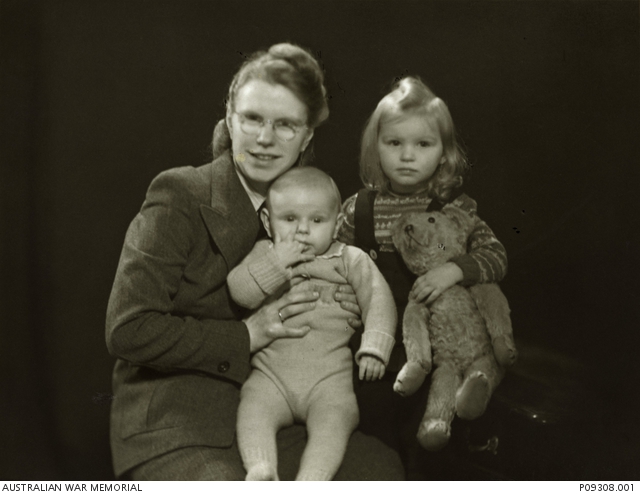 March 1944. Studio portrait of Lieselotte "Lotti" Frieda Saengar (nee Fischer) and her two children, Hannelore and Peter. Lotti Saengar was born in Kiel, Germany on 17 March 1920. Her mother died during childbirth and Lotti was raised by her father and stepmother. In 1940 Lotti met fitter and turner, Heinrich Saengar, who had been drafted to work in the shipyards at Kiel. They married on 30 August 1941.Their daughter, Hannelore, was born in January 1942. A few weeks later Henrich was drafted into the German army. He trained at Munster and was then sent to the Crimean Front where he worked repairing tanks and delivering them to the front. In July 1942 Henrich was sent to participate in the Greek campaign, serving at Salonika. In October he was granted leave and returned to Kiel to spend time with his young family. Nine months later his son, Peter, was born. After his leave, Heinrich served in North Africa, where he was captured on 17 April 1943 by British units, but was then handed over to the Americans. He was sent to America, where he was interned in Prisoner of War Camp Phillips in Kansas, then Prisoner of War Camp Warner near Salt Lake City, Utah and lastly to Prisoner of War Camp Cook in California, where he remained until April 1946. During his absence, Lotti raised their two children in war torn Germany. Kiel was a major naval base and was a target of British air raids. Heinrich returned to Germany in October 1946. In 1953 the family emigrated to Australia.