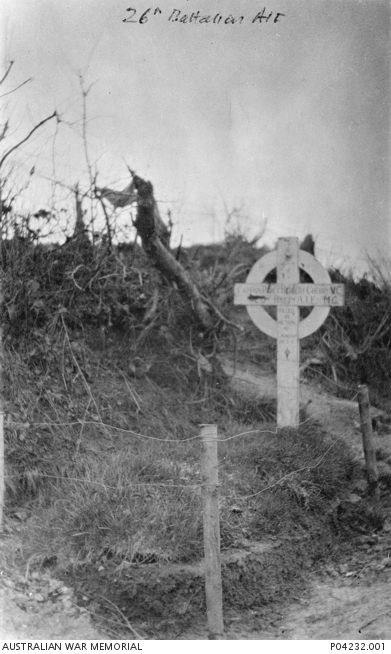 Original grave at Lagnicourt, France, of Captain (Capt) Percy Herbert Cherry VC MC, Commander of C Company, 26th Battalion. Capt Cherry was posthumously awarded the Victoria Cross for "most conspicuous bravery, determination and leadership when in command of a company detailed to storm and clear a village..." on 26 March 1917 at Lagnicourt, France. Capt Cherry cleared the village of the enemy after all the other officers of his company had been wounded. He organised machine gun and bomb parties and captured enemy positions, as well as resisting enemy counter attacks. After being wounded at 6:30 in the morning, he refused to leave his post, where he was killed at 4:30 in the afternoon by an enemy shell. Capt Cherry was also awarded the Military Cross on the same day for capturing two enemy machine gun posts (one single handedly) and turning the guns on to the enemy.