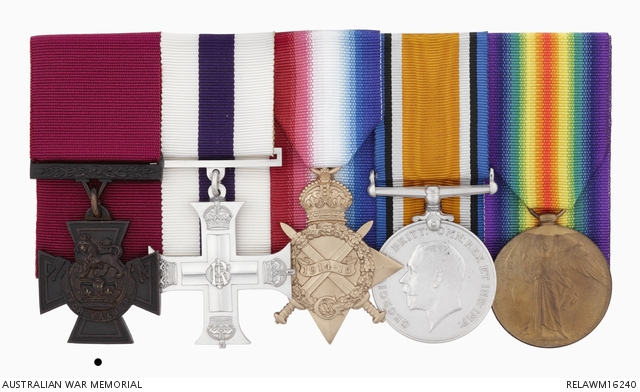 Percy Herbert Cherry was born to John Gawley and Elizabeth (nee Russel) Cherry in Drysdale Victoria on 4 June 1895. The family moved to Tasmania and settled in Cradoc when he was seven. He attended the local school until the age of 13 when he was privately tutored. At around this time he joined the cadets, eventually becoming a second lieutenant. He travelled to various districts to give drill instructions and won a gold medal for shooting at 16. Cherry later served in the 93rd Infantry Militia as a lieutenant while he worked on his parents' apple orchard 'Cherry Vale'.

Percy's heritage gave some indication that his future exploits might be dangerous. His father, prior to being an orchardist, had been a horse trainer and roughrider for the Victorian police, a buck jumper, hotel keeper and a cattle station manager in South Africa as well as an eyewitness to the last stand of the Kelly gang at Glenrowan in 1880.

Cherry enlisted on 5 March 1915 in Franklin, Tasmania with his father's permission and was posted to D Company, 26 Battalion as quartermaster-sergeant, with the service number 1023. Although a lieutenant in the militia, he was considered too young at twenty to hold a commission in the AIF. He embarked for overseas service aboard HMAT Aeneas on 29 June, arriving on Gallipoli in early September. There he was promoted D Company's sergeant major (CSM) on 13 September. Coincidentally, the man that he replaced as CSM, Arthur Ernest Crisp was also an orchardist from Cradoc area, had enlisted at Franklin at about the same time as Cherry and was assigned the service number 1022. He was invalided to Australia due to illness soon after Cherry was made CSM.

On 1 December, Cherry was wounded in the face and head by a bomb blast and was evacuated to Egypt. He was appointed second lieutenant on 8 December while convalescing in hospital. After he recovered he was posted to Tel-el-Kebir for machine gun training. He completed the course at the beginning of March 1916 and was seconded to the 7th Machine Gun Company (7MGC). He arrived in France with the unit on 21 March and took part in the failed attack against heavily defended German lines at Pozieres on 28/29 July. Sergeant Claud Castleton of 5MGC was awarded a Victoria Cross for his actions during this assault.

Attacking the same objective on August 5 while in command of no. 2 Battery 7MGC, Cherry was severely wounded and evacuated to London. During this engagement, noted historian Lionel Wigmore, Cherry exchanged fire with a German officer, mortally wounding him. Before his death the officer asked Cherry to mail a bundle of letters that he had in his pocket before uttering his final words 'and so it ends'. It is not known whether Cherry had the opportunity of carrying out the dying German officer's wishes.

Later in the month he was promoted to lieutenant. In December, after returning to France, Cherry was posted to 26 Battalion. He was appointed a temporary captain, which was confirmed in mid February 1917.

In March 1917, the 26th Battalion were involved in the fighting around Warlencourt and the attack on the German lines at Malt Trench. On 2 March, after the allied bombardment failed to clear the wire in front of Cherry's company's objective, he led them to a gap in the wire and entered the German trenches. While leading his men through the wire he was wounded but continued to fight. He personally captured one machine gun and his men another. Cherry then turned the machine guns on the Germans, who fled when they realised they were being pressed from two sides. For this action Cherry was awarded the Military Cross.

On 26 March 1917 Cherry was involved in an operation to capture the village of Lagnicourt by the 7th Brigade. While units successfully surrounded the perimeter, Cherry's company was detailed to clear the village itself. Overcoming stiff resistance he pushed forward only to find a heavily defended crater in the centre of the town. Not waiting for mortar reinforcements, Cherry captured the position under cover of Lewis Gun and grenade fire.

Reaching the far edge of the village, Cherry dug in his troops in anticipation of enemy counter-attacks. With about a hundred men, he defended the village against a battalion sized attack that continued throughout the day. Later that afternoon he was killed by a single German shell.

In reporting on the operation, Cherry's commanding officer, Lieutenant Colonel Reginald Travers wrote that 'I cannot speak in sufficiently glowing terms of this brave and gallant officer. His loss to the Bn & the AIF is an enormous one indeed.' For his actions during the taking of Lagnicourt Cherry was awarded the Victoria Cross. The recommendation reads:

'During the attack on LAGNICOURT on the morning of 26th March 1917, this Officer was in Command of "C" Coy. who stormed and cleared the village. His gallantry and bravery are beyond description. After all the Officers of his Company were casualties, he carried on in the face of fierce opposition, and mopped up the town in a most careful and determined manner. He continuously sent reports of the progress being made, and when held up for some time by an enemy strong point, immediately organised Lewis gunners, bombers and rifle bombers, and led the rush which captured this position. His leadership, coolness, and bravery set a wonderful example to his men. On clearing the village he took charge of the situation, and with about 100 men, and with the assistance of Lieut. STAPLETON, was mainly instrumental in beating off a most determined counter-attack made by the enemy with about 1000 men. He was wounded in the leg at about 6.30 a.m. but would not leave his post, encouraging all around him to hold out in the face of fierce opposition. He was unfortunately killed by an enemy shell at about 4.30 p.m. During the day he personally killed 9 Germans. He had previous to this attack been wounded on three occasions, and was recommended for a D.S.O. when the Battalion attacked the MALT TRENCH north of WARLENCOURT on March 1st 1917.'

The battalion held Lagnicourt and was relieved by the 19th Battalion that evening. Cherry's service records show simply that he was buried ¿at a spot near Lagnicourt N.E. of Bapaume.¿ Following the war his body was re interred in the Queant Road Cemetery at Buissy.

Cherry's Victoria Cross and Military Cross were presented to his parents at Hobart in October 1917 by the Governor of Tasmania, Sir Francis Newdegate. The ceremony was also attended by his four siblings and, according to newspaper reports, his fiancé of which nothing is known.