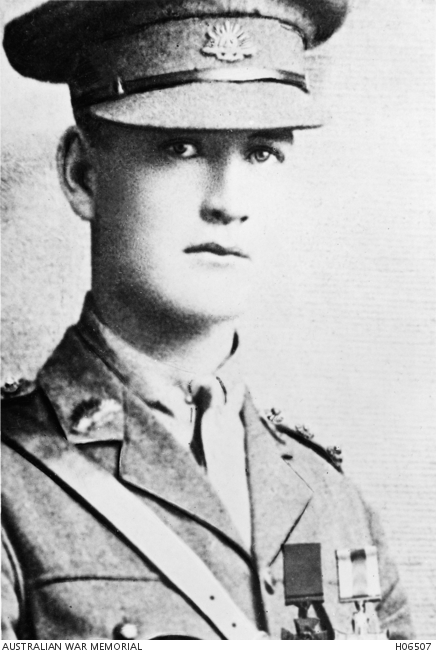 Studio portrait of Captain (Capt) Percy Herbert Cherry VC MC, 26th Battalion. A 20 year old orchardist from Huon, Tasmania prior to enlisting on 5 March 1915, he was promoted to Quartermaster Sergeant on 1 May and embarked for overseas with D Company from Brisbane, Queensland on 29 June aboard HMAT Aeneas (A60). While serving at Gallipoli, he was promoted to Company Sergeant Major and then wounded in action and evacuated to Egypt for medical treatment in early December. After being promoted to Second Lieutenant on 8 December, he was appointed the Commanding Officer of the 7th Machine Gun Company and went with them to France in March 1916. He was wounded in action on 5 August and evacuated to England for medical treatment. While there, he was promoted to Lieutenant on 25 August and in November returned to France where he later re-joined C Company 26th Battalion. Following promotion to Captain on 9 December 1916 he was later wounded in action on 2 March 1917 but remained on duty. He was again wounded at 6:30 in the morning of 27 March 1917 but refused to leave his post, where he was killed at 4:30 in the afternoon by an enemy shell. Capt Cherry was posthumously awarded the Victoria Cross for "most conspicuous bravery, determination and leadership when in command of a company detailed to storm and clear a village" on 26 March 1917 at Lagnicourt, France. Capt Cherry cleared the village of the enemy after all the other officers of his company had been wounded. He organised machine gun and bomb parties and captured enemy positions, as well as resisting enemy counter attacks. Capt Cherry was also awarded the Military Cross on the same day for capturing two enemy machine gun posts (one single handedly) and turning the guns on to the enemy. He is buried in the Queant Road Cemetery, Buissy, Nord Pas de Calais, France.