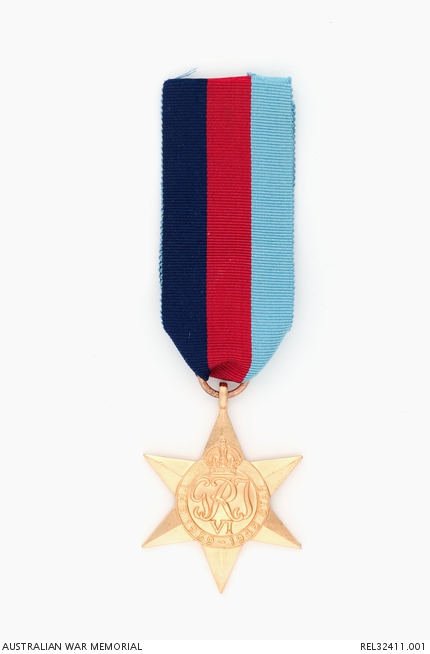 Associated with the service of VX57043 Gunner Alan William Glover, born on 25 April 1911 in Avoca, Victoria. In 1938 Alan, together with his future wife, Violet (Vi) Bertha Lloyd, moved to Melbourne in search of work. Alan was employed as a contract truck driver, and at the end of 1940 Vi was working in support of the war effort at the Maribyrnong munitions factory. Although Alan worked in what was regarded as a reserved occupation and could have avoided military service, he felt it was his duty to serve and enlisted on 2 June 1941.

With uncertainty over the length of time he might remain in Australia the couple decided to marry immediately. After a simple ceremony on 7 June at St John’s Presbyterian Church in Essendon they enjoyed a ten-day honeymoon before Alan left for basic training at Puckapunyal, where he was posted to the 8th Division as a gunner in the 4th Anti-Tank Regiment. Violet visited occasionally but before Alan’s training was completed, his unit received orders to move to Singapore. Vi saw him for the last time on 27 July 1941 as his troopship sailed from Port Melbourne. Gunner Alan Glover joined his unit in Malaya in September and was assigned to the 13th Battery which spent the next few months training in the Malayan jungle.

Vi received several letters a week from her husband and wrote to him in turn. In October 1941 she resigned from her job at the munitions factory to answer a public call from the Melbourne and Metropolitan Tramways Board (MMTB) for women to be trained as conductors, so that male employees could be released for active military service. In January the following year she decided to leave the tramways and returned to work in the Maribyrnong munitions factory.

On 6 December 1941 military service for the Australian serving in Malaya changed dramatically as the Japanese began their invasion. The speed of the Japanese advance took everyone by surprise. Alan’s regiment was rushed to provide cover for retreating Allied infantry on the east coast. The 13th Battery then moved north to provide anti-tank support for the 2/26th Battalion, and moved up the Muar Road to Yong Peng to hold the bridge while the infantry withdrew. It is unclear whether Alan Glover was captured at Muar, or later in the retreat back to Singapore but ultimately all the surviving members of the 4th Anti-Tank Regiment were captured and imprisoned in camps in Singapore in February 1942.

Alan and Vi continued to exchange letter for a few weeks, but in March 1942 her letters to him began to be returned. She was officially notified by Australian authorities that her husband was missing, presumed captured, on 1 July 1942. She did not know that Alan and his fellow members of the 13th Battery had volunteered in May for service in Burma with A Force, a group of 3000 Allied prisoners led by Brigadier Arthur Varley. The force left Singapore on15 May and were transported in small unseaworthy ships to southern Burma, where they were put to work levelling airfields.

Alan was in a group of prisoners working at Tavoy airfield. Despite warnings by the Japanese that any prisoner found outside the camp would be shot, Alan and seven other members of the 4th Anti-Tank Regiment, decided to escape within a few days of their arrival at Tavoy. The men simply walked out of the camp on the evening on 1 June. The escapees were betrayed by the Burmese and recaptured the following day.

Brigadier Varley was informed that the men had been recaptured, and would be shot on the afternoon of 6 June. Varley’s written and verbal protests were ignored by the Japanese. Four times he asked permission to speak to the men so that he could at least take a last message for their families, but permission was denied each time. He was, however, taken to witness the executions, in company with the Anglican and Roman Catholic chaplains. The latter were refused permission to minister to the prisoners until after the executions.

A work gang of prisoners were made to dig eight shallow graves off the end of the airfield, driving a heavy stake into the head of each one. The eight chained escapees were brought by truck to execution site and tied to the stakes. Varley wrote: I was forced to stand by and watch these men shot by a guard of 16 – 2 guards to each man and 2 shots fired by each. Death was instantaneous in all cases. Just before death the spirit of the 8 Australians was wonderful. They all spoke cheerio and good luck messages to one another and never showed any sign of fear. A truly courageous end. Alan Glover died on the eve of his first wedding anniversary. He is buried at Thanbyuzayat War Cemetery in Burma.

Vi, aware only that her husband was listed as a prisoner, continued working at the Maribyrnong munitions factory. It was not until December 1944 that Vi learnt of her husband’s fate. Reports of the execution of the eight men were relayed by prisoners of war who had been rescued by the US Navy after the Japanese transport taking them to work in Japan had been sunk in the China Sea.

After the war, Vi bought herself a small flat in Melbourne and trained as a hairdresser, running her own salon in Brunswick for a number of years, before settling down to an office job in the city. She never remarried. Violet Glover died on 18 August 2003.