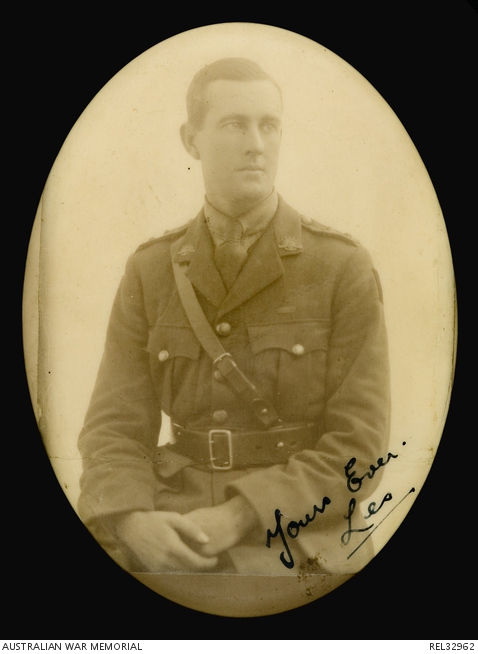 Oval celluloid on tin studio portrait of Lieutenant George Leslie Dolan DCM, 53 Battalion, AIF. Handwritten in black ink at the bottom of the photograph is 'YOURS EVER. LES' . The reverse is fitted with a hinged swing-out stand and a wire mounting loop.

Associated with Lieutenant G L Dolan DCM, 53 Battalion AIF. Born at Surrey Hills, Sydney in June 1894, George Leslie 'Les' Dolan was working as a shop assistant and serving in the militia with the 24th Infantry Regiment, when he enlisted in the AIF on 8 July 1915. 4905 Private Dolan embarked aboard HMAT A15 Star of England with 1 Battalion, 15th Reinforcements on 8 March 1916. After arriving in Egypt, he was transferred to the 53rd Battalion.

After a period of further training, Dolan embarked for France, arriving at the end of June 1916. He moved north with the 53rd Battalion, and entered the line near Fleurbaix in time to participate in the disastrous Battle of Fromelles on 19 July 1916. He was promoted to lance corporal a week later. Dolan was then promoted to temporary corporal in September, corporal in October, temporary sergeant in May 1917 and sergeant in July.

On 25 September 1917, the 53rd Battalion took part in the attack at Glencorse Wood, east of Ypres in Belgium. Dolan was awarded the Distinguished Conduct Medal for his actions during the fighting. He was selected for officer training and attended No. 5 Officer's Cadet Training Battalion at Cambridge, England.

Dolan rejoined his unit in June 1918 and a month later was Mentioned in Despatches for his actions during the attack on Morlancourt on 29 July 1918. Dolan was promoted to lieutenant on 1 September. After the war, Dolan married Ethel Dillon O'Brien Porter from Cambridge on 12 May 1919. On 8 August 1919 he embarked aboard HT Katoomba for his return to Australia. Dolan was discharged from the AIF on 17 November 1919. During the inter-war years, Dolan served with the 53rd Battalion (West Sydney Regiment ), Citizens Military Force (CMF).