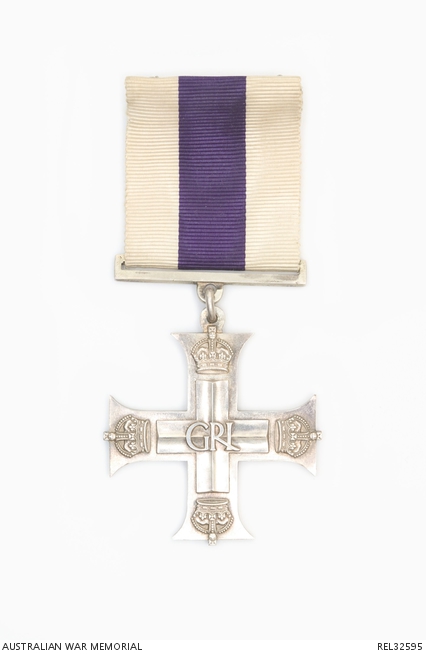 Awarded to NX5992 Lieutenant Donald Graham Healey. Healey was born in Sydney in April 1919 and was living in Wagga Wagga, NSW at the outbreak of war. He enlisted in the Second AIF from Cootamundra on 3 November 1939 and was posted to 2/4 Battalion. On 21 December 1944 he led two sections of 18 Platoon, D company on attack on a Japanese bivouac in the vicinity of Hill 26 in the Danmap River area, New Guinea. For this action he was awarded the Military Cross. The citation reads 'LIEUTENANT HEALEY as a platoon commander displayed outstanding courage, leadership and initiative in action in the Danmap River Area. After a speedy appreciation, with complete disregard for his own personal safety, he led two sections against thirty enemy. By this action LIEUTENANT HEALEY ensured the safe passage across the Danmap River of a relieving force, who would have undoubtedly suffered heavy casualties.' Healey returned to Australia after the war and was discharged on 13 September 1945. The Military Cross was presented to him by the Governor of NSW at a ceremony at Government House, Sydney on 26 February 1947.