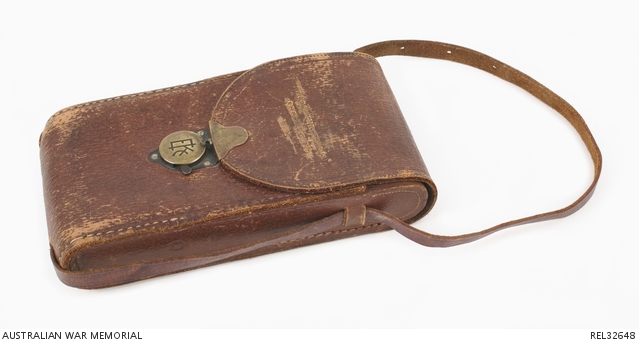 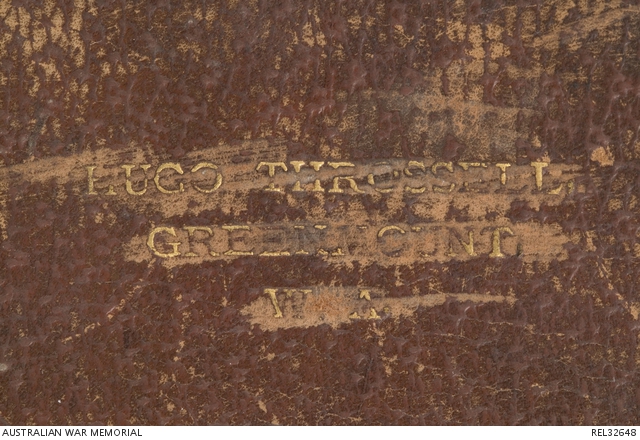 Brown leather camera case lined with brown velveteen. The case is rectangular in shape with an adjustable leather strap. The strap passes through two slits at the bottom of the case, and lies flat along the sides before forming a loop over the top. It is held in place near the top by a leather loop on either side and is secured on the right side by a metal buckle. The case closes with a rounded flap held in place by a brass clasp which is impressed with the maker's trademark symbol. Above the clasp the flap has been embossed in gold lettering with 'HUGO THROSSELL GREENMOUNT W.A.', however these words have been heavily scratched over. Under the flap on the front of the case is the embossed trade name 'Kodak'.

This case was designed to carry an example of Kodak's autographic camera, and was used by Captain Hugo Throssell late in the First World War. The autographic camera was released in 1914 and continued to be produced until 1932. A thin slip of carbon paper was placed between the film and the paper backing and a small trap door built into the back of the camera allowed the photographer to inscribe a title or message on the film using a small metal stylus. Hugo Throssell, who had the case embossed after the war with his name and address, was born in Northam, Western Australia in October 1884, the son of George T Throssell, second premier of WA. He was educated at Prince Alfred College in Adelaide and returned to WA to take up farming at Cowcowing. On 5 October 1914 Hugo, and his brother Frank, enlisted in the AIF and joined 10 Light Horse Regiment (LHR). The regiment embarked from Australia in February 1915, although Throssell remained in Australia to complete an officer's training course. He rejoined the unit on Gallipoli in August as second lieutenant and was awarded the Victoria Cross for his actions during the battle at Hill 60 between the 29th and 30th August. Throssell was badly wounded during the battle and was sent to hospital in England. Here he contracted cerebrospinal meningitis and was invalided home to Australia in April 1916. He participated in the recruiting campaign for the rest of that year and then embarked for return to his unit in Palestine in January 1917. He rejoined 10 LHR in April and was promoted to captain in August. He led the Australian ceremonial guard into the city of Jerusalem after its capture in 1918. Suffering another breakdown in health, Throssell was sent back to Australia and discharged on 13 February 1919. He married the novelist Katherine Susannah Pritchard and moved to his property at Greenmount, WA. He committed suicide there in November 1933.