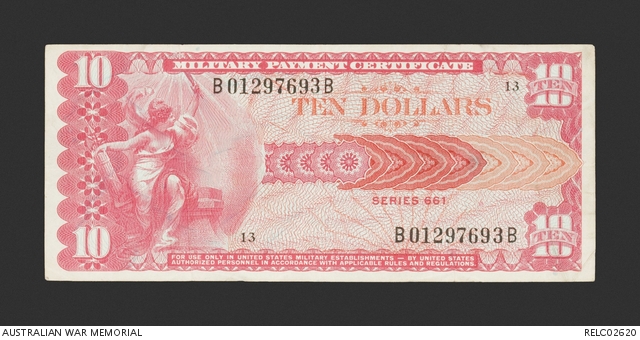 Currency from the collection of 39190 Rudolph Domenico Brown, who served with 7 and 1 Battalions, the Royal Australian Regiment (RAR). Brown was born in 1944 and served in Vietnam with 7 RAR from 5 January 1968 to 10 April 1968, and with 1 RAR from 11 April until 3 December 1968. Military Payment Certificates (MPC) were created and issued in US occupied areas in an attempt to prevent and combat black-market activities and to ensure that the American dollar remained insulated. MPCs were issued to service personnel and some types of civilians. They were accepted as a form of payment on bases, ships, canteens, and other similar places but could not be used to buy local goods or services without prior permission and only by those authorised to accept MPCs. Despite security measures being put in place, MPCs soon found their way into the local economy by fraud, theft or other means. When American officials felt that substantial quantities of MPC were embedded into the local economy, or that the current series of MPC was in some other way being compromised, another series would be released to replace and devalue the current one. Only those personnel authorised to have MPC when C-Day, or Conversion Day, rolled around, had the chance to convert their soon to be worthless MPC to the newly issued MPC and retain their value. This note is part of Series 661, issued 21 October 1968 and withdrawn 11 August 1969.