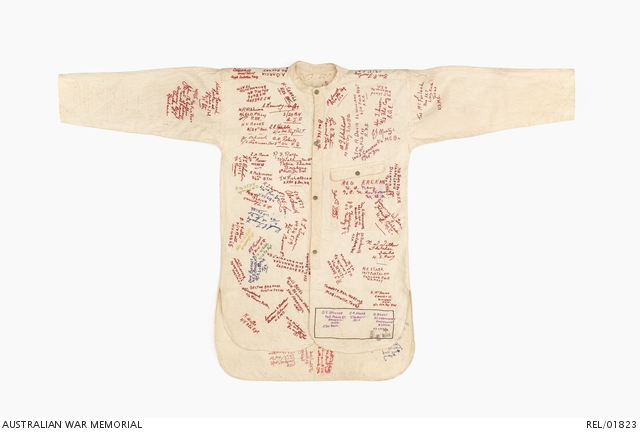 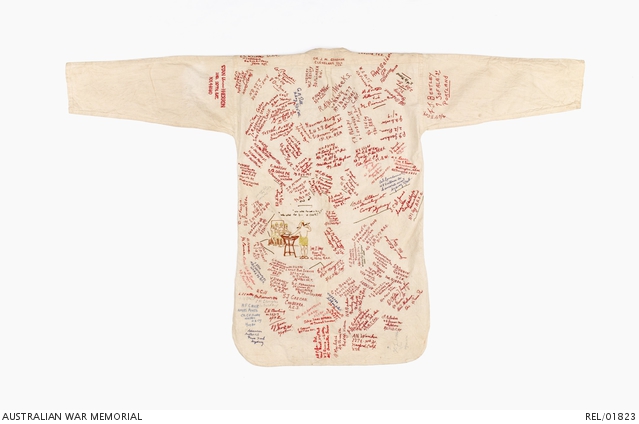 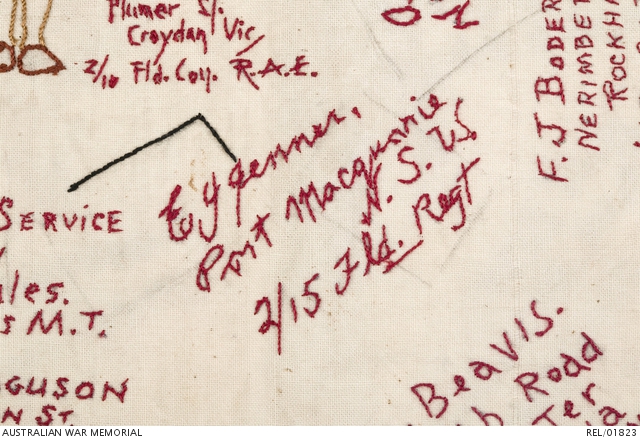 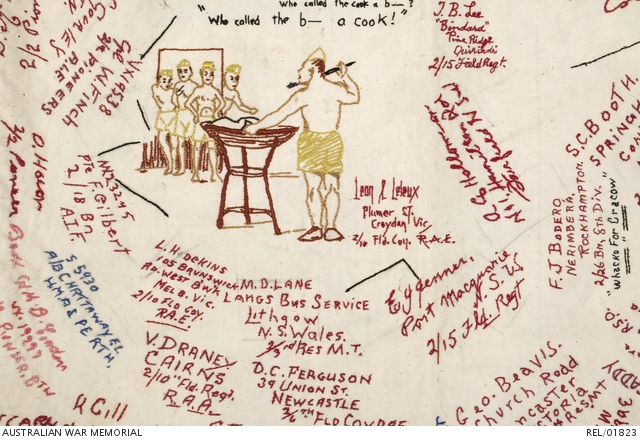 Japanese issue unbleached calico undershirt with a low stand collar, narrow yoke, single left breast pocket with a rectangular flap, and long sleeves without cuffs. The shirt fastens down the front with four green glass buttons and the pocket flap with single button. The rounded shirt tail is longer than the front. There are Japanese manufacturer's marks and accepatance stamps on the lower left front. The entire body of the shirt, and part of the sleeves, are covered in indelible pencil signatures and addresses, most of which have been over embroidered in red, blue, green, yellow and mauve stem stitch. Those signatures on the sleeves which have not been embroidered are now illegible. The name of the owner of the shirt has been machine embroidered on the left sleeve in the 1970s, 'STAN HERRON 2/20 Bn'. There is a brown and green embroidered cartoon on the back of the shirt with the caption '"Who called the cook a b_?" "Who called the b_ a cook!".

NX48180 Private Stanley Herron was born in England, in 1914, and later immigrated to Australia. He enlisted for service in the Second World War in Sydney on 24 September 1941 and served first with 2/19 Battalion. The battalion was posted to Malaya with 8th Division, and Herron later transferred to 2/20 Battalion. He escaped from Singapore on a Chinese boat shortly before the surrender to the Japanese and reached Java, where he joined an Australian-bound ship. It was bombed by the Japanese and Herron ended up in a lifeboat. After drifting for five days he landed on Java again. He escaped to the hills and joined a guerrilla group but was forced to surrender to the Japanese when they threatened wholesale killing of the local villagers. He was taken to Singapore and then sent to work on the Burma-Thailand railway. He avoided a double amputation of his feet, due to tropical ulcers, after doctors applied maggots to clean them out, and subsequently returned to Changi. He was sent by sea to work in the coal mines in the mountains of Japan and it was here at the Fukuoka Camp that he was issued with the calico undershirt. Herron did not wear the shirt but kept it under the floorboards taking it out for fellow prisoners to sign in indelible pencil. The shirt eventually had about 200 names on it, some of them added immediately after his release, before he was repatriated to Australia.

The signatures include those of fellow 8th Division prisoners of war and those of survivors from HMAS Perth and USS Houston who were sunk in Sunda Strait in 1942. The cartoon about the cook refers to Herron's experience as a cook in the mines. Herron was discharged from the army on 3 December 1945. His wife Betty embroidered over the names after the war when she noticed that the pencilled signatures and addresses were fading. Before she donated the shirt to the Australian War Memorial she realised that her husband, who had died in 1967, has never signed the shirt, so she had his name machine embroidered on the left sleeve.