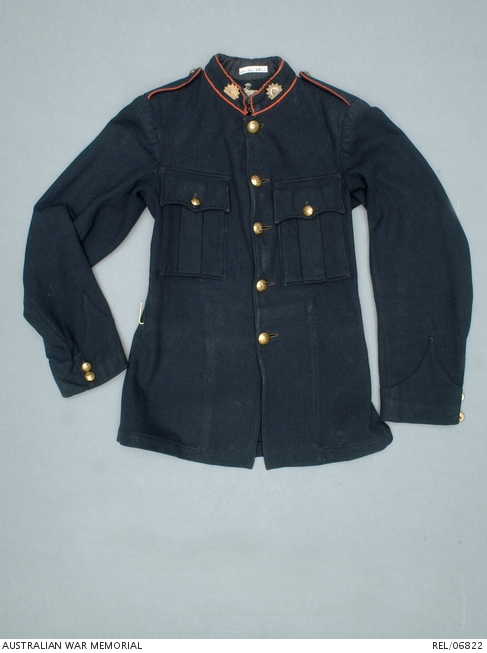 Dark green wool serge tunic with stand collar and pointed cuffs. Collar edged all round with narrow red wool Russia braid and decorated with brass Cadet Corps collar badges. Dark green shoulder straps piped with red wool and fastened to the tunic with a small brass Australian Commonwealth Military Forces button 1903-1910. Two more of the same buttons at the pointed cuffs and on each of the three-pointed flaps securing the two pleated breast pockets. Panelled tunic fastened with five large Commonwealth buttons made by 'STOKES & SONS MELBOURNE', and ferrous metal press stud between the third and fourth buttons. Tunic is unlined except for two reinforcing strips of wool serge behind the side darts supporting brass belt hooks at each side. Collar lined with black cotton twill and sleeves with striped cream cotton sateen. Faded cotton gauze name tag hand stitched to back neck facing.

This tunic was worn by Senior Cadet William 'Bill' Davison Walster of Junee when he went to England with the Commonwealth Cadets as part of the Australian 1911 Coronation Contingent to attend the coronation of King George V. Aged 15 and 9 months, he was one of four or five representatives from Junee; their little group led by the owner of the local cordial factory, Captain H G Mould. Walster had been in the Commonwealth Cadets for some years at the time of the Contingent and there is evidence that his father, Arthur, owner of the Junee Pioneer Foundry, funded his son's trip to the tune of £100. Whilst in England, Bill stayed with his grandmother, Alice Walster at Epworth. He was commissioned in the Commonwealth Cadet Corps with the rank of second lieutenent on 28 April 1914. At the declaration of hostilities in August 1914, Bill Walster, then almost 19, rushed to enlist and was accepted into the AIF, only to have his father refuse his permission and withdraw him as he considered him too young. As a result Walster was obliged to wait another year. He finally enlisted on 31 July 1915, was assigned service number 3464, posted to 4 Battalion, and embarked for overseas service aboard HMAT Port Lincoln on 14 October 1915. After some months training in the Middle East, Private Walster transferred to 53 Battalion and later applied for a transfer to the artillery and was initially transferred to 115 Howitzer Battery (25 Howitzer Brigade), then, once he had arrived in France on 25 June 1916, to 114 Howitzer Battery (14 Artillery Brigade) on 3 July 1916, where he remained for the war. Walster returned to Australia aboard the transport Wyreema on 14 April 1919 and was discharged on 26 July. Walster served again in the Second World War, with 17 Battalion Volunteer Defence Corps between May 1942 and December 1943.