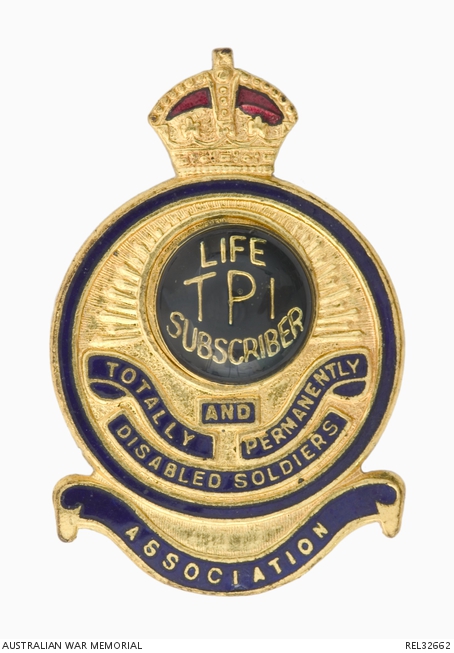 Round gilt badge with black enamel detachable pin central with 'LIFE TPI SUBSCRIBER' in gold text. Underneath in navy blue enamel scrollwork is ''TOTALLY and PERMANENTLY DISABLED SOLDIERS' . The badge is surmounted by the King's Crown with red enamel in the void of the crown. The base of the badge has navy blue scroll work and the word 'ASSOCIATION' in gold text. The reverse has a brooch pin and makers name in raised lettering at the base 'Swann & Hudson'. Surmounting this is the number 16579 which has been stamped.

TPI Association Life Subscriber's badge associated with the service of Private Nelson Alfred Ernest Short. Short was born in Enfield, Sydney NSW on 30 August 1917. On the 27 June 1940 he enlisted at Martin Place Sydney aged 23 years and was posted to 6 Battalion on the 12 July 1940. On 31 July 1940 he was transferred to 2/18 Battalion. As part of the 22nd Brigade of the 8th Australian Division, the 2/18th sailed from Sydney bound for Singapore on 4 February 1941. Immediately upon its arrival in Singapore on 18 February, the 2/18th moved north to Port Dickson in Malaya, where they trained for service under tropical conditions. In March they moved to Seremban in central Malaya, in late-August to Jemaluang on the east coast, and in early September to Mersing, also on the east coast. The 2/18th Battalion's first major action was at Nithsdale Estate in the early hours of 27 January 1942. The battalion lay in wait for the advancing Japanese and sprang an ambush involving three of its companies. It took the Japanese completely by surprise and inflicted heavy casualties. But command broke down in the dark as the complex ambush plan had been intended for daylight, and a premature withdrawal order from brigade headquarters forced the abandonment of D Company behind the bulk of the Japanese force. The 2/18th then withdrew to Singapore and was allocated a position in the centre of the 22nd Brigade's sector on the island's east coast but the wide frontage it was required to cover meant its platoons and sections had to be widely dispersed. When the Japanese launched their invasion on the night of 8 February, the 2/18th had no hope of holding them back, although its positions along the waterfront inflicted heavy casualties. The Japanese infiltrated between the 2/18th's posts and the battled degenerated into vicious scattered engagements in the dark. Like most Australian units involved, it fell into a desperate retreat that ended with surrender on the outskirts of Singapore city on the night of 15 February. It was not until 13 April 1942 that Short was reported as a Prisoner of War, and was interned at a camp in Borneo. After over three years of captivity Short was one of the prisoners forced to take part in the second Sandakan death march in May 1945. Short was one of only six Australian's who survived captivity at Sandakan Camp and the Sandakan death marches - managing to escape in July 1945. With the assistance of the local people he survived. Short was recovered by Allied forces on 24 August 1945 and evacuated to the 2/4th Australian General Hospital Troop Ship suffering from Berri Berri, dysentery, worming infection and scabies. Short was then transferred to Morotai and spent time recovering aboard the 2/9th General Hospital Ship. From Morotai he flew back to Sydney, reaching Australia on the 13 October 1945 and was discharged on the 4 March 1946. Nelson Short later recalled the bravery with which many POWs faced their end: '...And if blokes just couldn't go on, we shook hands with them, and said, you know, hope everything's all right. But they knew what was going to happen. There was nothing you could do. You just had to keep yourself going. More or less survival of the fittest.'