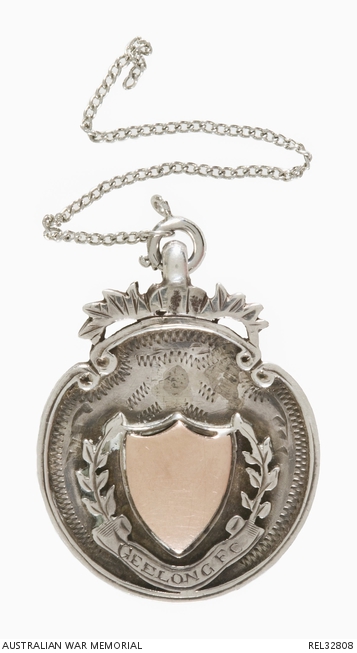 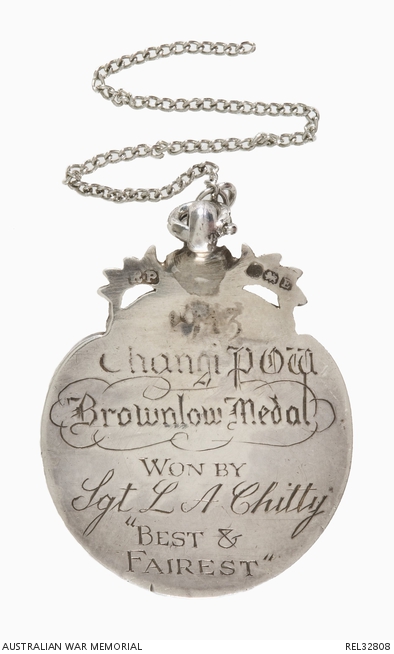 Small circular sterling silver medallion with a decorative scroll attached to the top. The front of the medallion has a hammered finish with a gold shield in the centre. The shield is surrounded by a wreath and a scroll which is engraved with the words 'GEELONG FC'. The reverse of the medallion is hallmarked with the maker's details (R.P, a lion passant and the date letter E), indicating it was originally made by silversmiths Robert Pringle & Sons in Birmingham in 1929, and engraved '1943 Changi POW Brownlow Medal WON BY Sgt L A Chitty "BEST & FAIREST"'.

This medallion was awarded to Corporal Leslie Allan 'Peter' Chitty on 24 January 1943 in Changi Prisoner of War Camp, Singapore. The occasion was the Victoria versus 'The Rest' Australian Rules football game and the medallion represented the 'Brownlow Medal' for the Best and Fairest player in the preceding football series played in the camp. After their imprisonment in Singapore a number of football and other sporting competitions were begun amongst the prisoners. Those who played Australian Rules football organised a six team competition named after sides in the Victorian Football League.

Amongst the keen participants was Peter Chitty who had, before the war, played several league games for St Kilda. The representative game held on January 24 was the last game of football played in the camp. The rate of injuries from sporting matches was climbing and the officers believed it was in the best interests of the prisoners to stop the games. Before the match Chitty, who was selected to captain Victoria, was presented with the medallion which was made from a modified soccer medal found in the stores and engraved with his details. The original Brownlow Medal is a much coveted award in the Football League and has been fiercely contested from its inception in 1924. The Changi Brownlow was awarded with no less reverence. The match was played with a record attendance of prisoners and guards and the result was Victoria 14-9: 93 defeated The Rest 10-5: 65.

Corporal Peter Chitty was born in Corryong, Victoria on 12 March 1912. At the outbreak of the Second World War he was working as a dairy farmer on the family property at Cudegwa. He along with three of his brothers enlisted in the Second Australian Imperial Force. Peter enlisted on 25 July 1940 in Caulfield, Melbourne and was assigned the number VX48347. After initial training he was posted to 2/2 Motor Ambulance Convoy in January 1941 and promoted from Private to Acting Corporal. Arriving in Singapore on 1 March 1941, he was confirmed as Corporal on the 8th. From March 1941 to February 1942, Chitty served in Malaya with the 2/2 MAC, undergoing numerous detachments to 2/9 Field Ambulance and 10 Australian General Hospital. His last detachment was recorded as 17 January 1942 and he was posted as missing on 26 March 1942. It was not until 9 June 1943 that he was confirmed as a prisoner of war.

Official details of his time as a POW were not recorded, although he did serve on the Burma-Thailand railway. This service is referred to in the citation for the British Empire Medal which he was awarded on 12 March 1947. It reads, 'L/Sgt CHITTY was a prisoner of war in Japanese hands from Feb 42 to Aug 45. In 1943 he was a member of an AIF party engaged in the construction of the Burma-Siam railway. During various long marches through the jungle under extremely difficult conditions L/Sgt Chitty set an outstanding example of unselfish conduct and courage continuously helping the sick by carrying their kits as well as his own and helping them along and constructing shelter for them when halted. By these means he undoubtedly saved lives. During the whole period that he was in Burma-Siam and subsequently in Malaya L/Sgt Chitty was outstanding in conduct and devotion to duty under difficult circumstances.' Chitty was recovered from Changi POW Camp on 8 September 1945 and arrived in Sydney in October 1945. He spent some time in hospital on his return to Victoria and was discharged on 5 December 1945.

Of Peter Chitty's three brothers who also enlisted in the Army, Arthur served in North Africa with 2/23 Battalion and was killed in action at El Alamein on 22 July 1942. Ronald and Phillip also served in North Africa, both with 2/2 Field Ambulance and were taken prisoner by the Germans. They were repatriated in 1943, and visited their brother's grave in North Africa in September that year. There are photographs recording this visit held at MEA0959-61 and MEC2522.