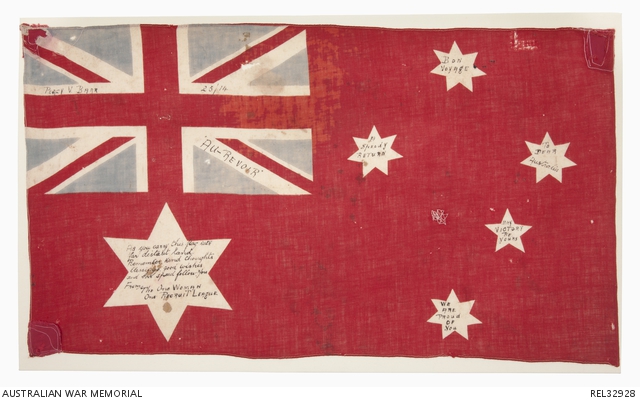 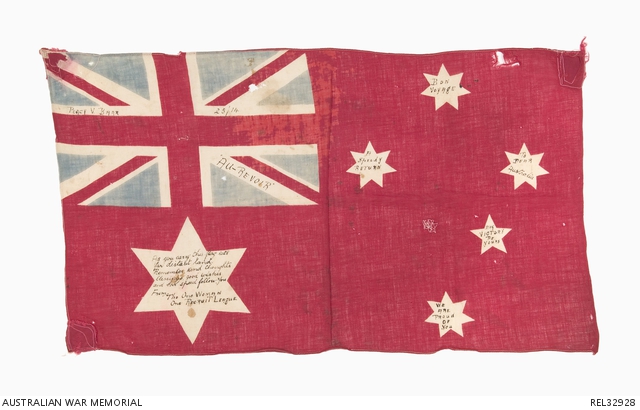 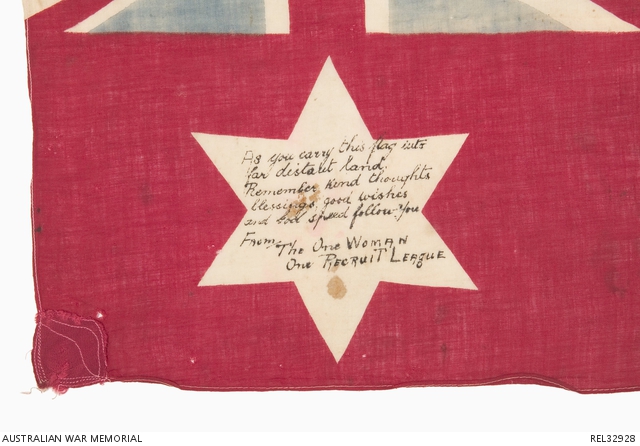 Printed cotton Australian red ensign signed in black from 'The One Woman / One Recruit League'. Union Jack has recipient's name, '25/14' and 'AU-REVOIR' applied in ink. Each of the five stars of the Southern Cross are also signed: 'Bon Voyage', 'A Speedy Return', 'To Dear Australia', 'May Victory be Yours', ' We are proud of you'. The six pointed star is signed: 'As you carry this flag into / far distant land / Remember kind thoughts / blessings, good wishes / and God speed follow You / From / The One WOMAN / One RECRUIT League'.

7441 Private Percy Vernon Barr, a labourer of Mirboo North, Victoria, enlisted on 25 June 1917 at age 30 and embarked for overseas service aboard HMAT Nestor on 21 November 1917 as a member of the 25th reinforcements of the 14th Battalion. He was wounded in France on 18 September 1918 and returned to Australia on 2 February 1919. This Red Ensign was presented to him upon his embarkation by an anonymous donor simply signed as 'The One Woman One Recruit League'.

The league was a recruitment organisation, based in Melbourne. It was established in April 1917 in conjunction with the State Recruiting Committee of Victoria. The aim was for each woman in the league to work towards recruiting one man. If she achieved this her name would be added to the league's honour board. By August 1917 the league had a membership of 200 women and that year recruited 200 men and was expecting to open a branch in Ballarat. The league was not without its opponents and on 15 August 1917 a meeting was disrupted by 100 protestors who objected to sending men to the war.

It is possible Barr's wife Clara was the person who 'recruited' him. Percy Barr carried this flag with him during his active service in France and his return to Australia. It remained a significant relic for his family. His grandson Ross recalls that it was used during the Royal visit to Australia in 1954, when he and some mates travelled some 60 km from Korumburra to Warragul in the back of a ute to see the Queen, waving this flag, which was wired to a rough pole. The subsequent repairs were made by Ross's mother on a sewing machine.