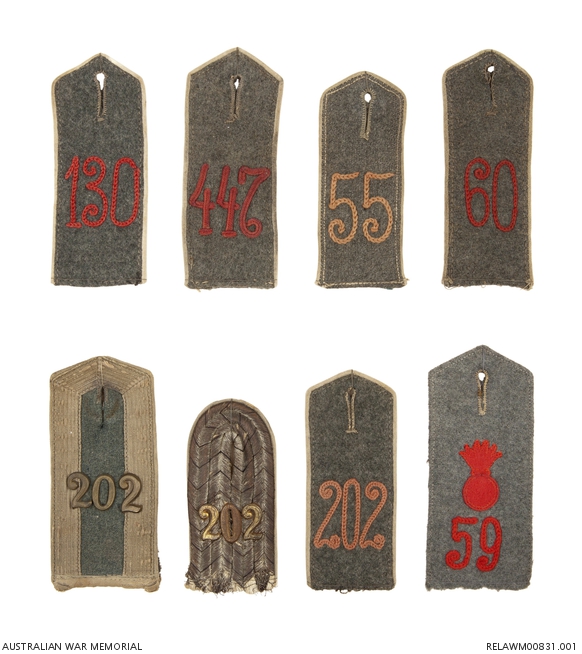 Field grey wool shoulder strap, with narrow white wool piping around the sides and top, and a machine stitched buttonhole at the neck end. A red wool chain stitch numeral '447' is sewn to the strap.

Single shoulder straps were routinely removed from dead or captured Germans for intelligence purposes, so that the names of the German units opposing the Allied forces could be established.

This strap was collected by Captain (later Major) Francis Joseph McAdam immediately after the battle of Hamel, on 4 July 1918. McAdam initially enlisted in the AIF on 2 November 1914 and was assigned as a second lieutenant in the artillery. He was promoted to lieutenant in January 1915 and later served on Gallipoli with the 8th Battery. He was evacuated from the peninsula suffering from enteric fever and after treatment in Egypt returned to Western Australia in January 1916 for three months, to assist in his recovery.

While in Australia, McAdam married Kathleen Amy Wells in Perth, WA. McAdam rejoined the AIF in May 1916 and was posted as adjutant to the 23rd Howitzer Brigade. In September he was transferred briefly to 41 Battery, 11 Field Artillery Brigade (FAB), before being transferred to the 37th Battery of 10th FAB in October, part of the 3rd Division.

Shortly after the battle of Hamel, McAdam was wounded on 13 July, returning to his unit 12 days later. In October 1918, McAdam was promoted to temporary major. McAdam departed England in May 1919 to return to Australia.