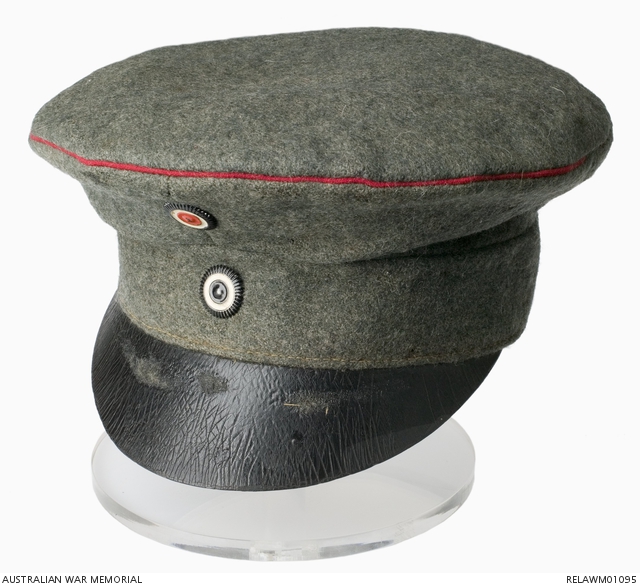 Field grey wool Model 1917 Prussian infantry officer's service cap (Einheitsfeldmutze) without chinstrap. It has lacquered black leather peak, red piping around crown, and metal cockades for Germany (front of crown) and Prussia (front of hat band). The crown is lined with coarse weave blue cotton. The sweatband is made from black oilcloth.

Cap taken from a German Officer by Corporal Lawrence Carthage Weathers VC, 43 Battalion AIF, in the incident in which he was awarded his Victoria Cross, north of Péronne, on 2 September 1918.

Lawrence Weathers was born in New Zealand and came to Australia as a boy. He joined the AIF in 1916 and was wounded in his first major action in June the following year. In May 1918 he was badly gassed.

The act for which Weathers received the Victoria Cross took place the day after the capture of Mont St Quentin, while his battalion was clearing enemy positions north of Péronne. He showed extraordinary valour and, with his comrades, captured 180 prisoners and three machine-guns.

He was wounded in action between Rosnoy and Bony, France on 29 September 1918. He subsequently died from those wounds on the same day and is buried in Unicorn Cemetery, Vendhuille, France.