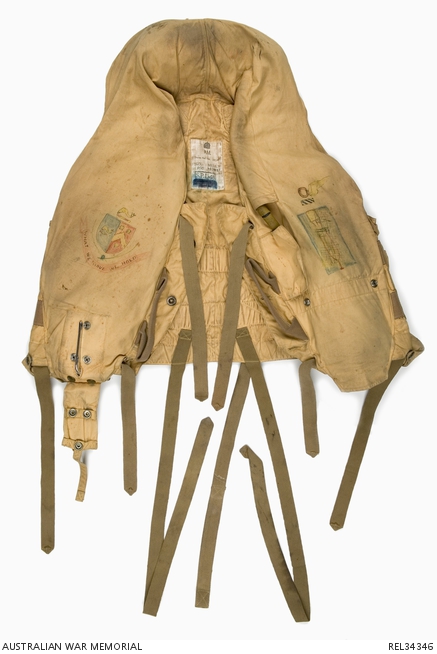 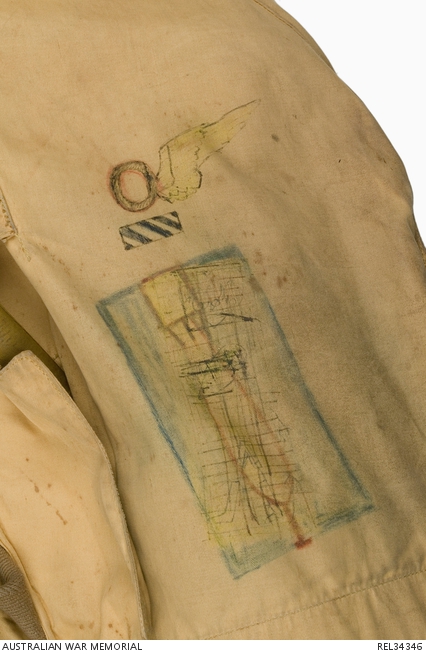 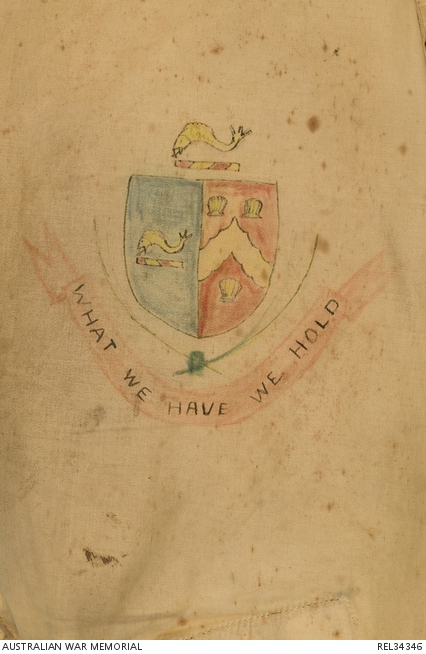 Yellow Air Ministry 1941 pattern Mae West flap life waistcoat of yellow cotton twill, fitted with inflatable internal bladders in a stole pattern at the chest and neck. The lower right front of the waistcoat is fitted with a carbon dioxide cylinder with a chrome-plated actuating lever for instantaneous inflation. Each frontal lobe and the collar is also fitted with a kapok pad; a zipper is fitted to the base of the collar to allow access to the filling and bladders. The front of the waistcoat is secured by three dished brass buttons and two cotton tape ties, and is supplied with two pairs of cotton leg ties. The rear is fitted with a triangular flap, the apex sewn to the collar and each corner attached via snap fasteners to the lower rear corner of the waistcoat. A roll of sponge rubber is sewn into an internal channel along each side of the flap. The left rear of the coat is fitted with an oilskin lined flap, designed to be torn away using a fitted cotton tape. This originally held a green dye pocket which could be released into the water. There is a heavy cotton webbing loop on either side of the front (introduced in January 1942) to assist a rescuer to lift an airman out of the water. The inside back bears a white cotton label printed in black, (crown) A.M. Stores Ref. No. 22C/447 SIZE:- MEDIUM Contract/Stores/2241/35MU/C34 (a) S.P.I. 48'. The label is also marked in black ink 'P/O Howes'. The proper left front bear a drawings of an Observer's wing (brevet), a Distinguished Flying Cross ribbon and a bomb. The proper right front bears a drawing of a shield in red and blue. The shield is surmounted by a sea monster over a red and yellow bar. The shield itself is divided in half vertically. The left half bears the same sea monster and bar, while the right is divided by a yellow chevron with a single cockle shell above its apex and two further shells beneath it. A red ribbon scroll under the shield bears the motto 'WHAT WE HAVE WE HOLD' in black ink.

Related to the service of 404900 Thomas Edward White Howes. Employed by Qantas Airways, Brisbane before the war, he enlisted in the RAAF on 6 December 1940 aged 18. He trained in Australia and in Canada as part of the Empire Air Training Scheme (EATS). After training he embarked for the United Kingdom, where he completed his training as a navigator, flying in Wellington bombers in January 1942.

Howes was commissioned as a Flying Officer on 15 March and was assigned to 70 (Wellington) Squadron, RAF in the Middle East later that month. The squadron was equipped with Vickers Wellingtons based at Qotafiyah, Egypt. His first mission on 28 April was against German supply shipping anchored at Benghazi. With targets ranging from shipping and airfields to road convoys and supply dumps, Howes flew 13 night missions through May and June 1942.

During a night attack on German transport in the Ras El Kanyis area on the night of 25 June after bombing the column of vehicles, Howes' Wellington, piloted by Flight Sergeant Stewart, returned for a number of strafing runs, with the Second Pilot, Sergeant Brown and Wireless Operator, Sergeant Calvert operating the bomber's two beam guns. They were surprised by an enemy fighter which raked the sides of the aircraft with cannon fire, setting electrics on fire and wounding three of the crew. For his actions in dousing the fires and retrieving the burning rear gunner, Sergeant Wagner who had lost a leg, and attending to his crew's wounds with morphia, Flying Officer Howes was awarded the Distinguished Flying Cross. A photograph of the Wellington being retrieved the next day shows sections of the fuselage completely burned through, revealing the geodesic structure. Wagner later died of his injuries.

The squadron moved northwest of Cairo in the wake of the allied retreat. Howes later transferred to 104 (Wellington) Squadron, RAF and having flown 44 operational missions, it appears that he took on a navigator training role with 203 Group.

He was promoted to Flight Lieutenant in September 1943 before moving to RAF Aquir in Palestine, (south of Tel-Aviv). On 6 May 1944 Howes embarked for Australia, arriving on 4 June. He was transferred to the RAAF Reserve on 16 March 1945, enabling him to rejoin Qantas. He remained with the RAAF Reserve until at least the late 1950s. During the Vietnam War, he served as a navigator on the Qantas ‘Skippy’ troop flights to and from Vietnam.