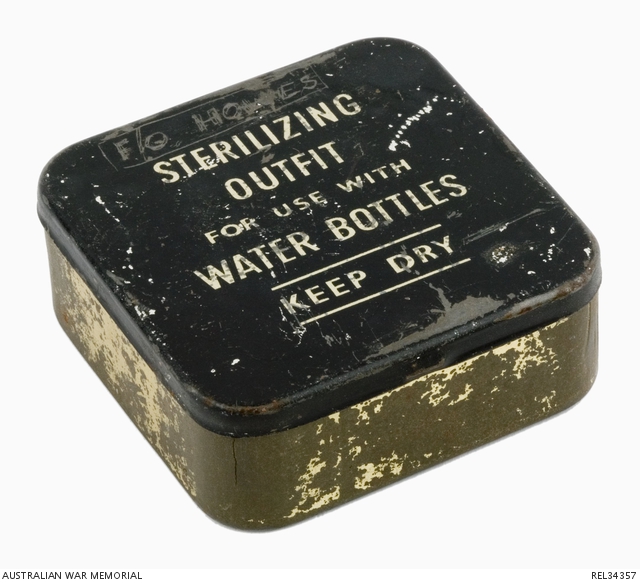 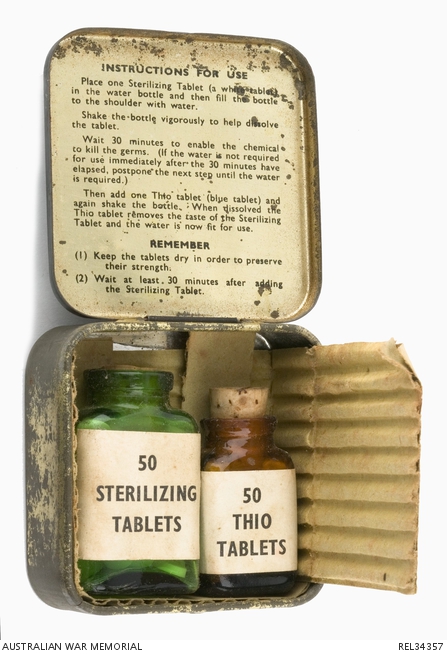 Water sterilizing outfit contained in a square tin plated steel box with a black painted lid marked in white lettering 'STERILIZING OUTFIT FOR USE WITH WATER BOTTLES/ KEEP DRY'. The lid also has the name of the owner scratched into it 'F/O HOWES'. The box is complete with its chemical contents, contained in two small glass bottles.

Related to the service of 404900 Thomas Edward White Howes. Employed by Qantas Airways, Brisbane before the war, he enlisted in the RAAF on 6 December 1940 aged 18. He trained in Australia and in Canada as part of the Empire Air Training Scheme (EATS). After training he embarked for the United Kingdom, where he completed his training as a navigator, flying in Wellington bombers in January 1942.

Howes was commissioned as a Flying Officer on 15 March and was assigned to 70 (Wellington) Squadron, RAF in the Middle East later that month. The squadron was equipped with Vickers Wellingtons based at Qotafiyah, Egypt. His first mission on 28 April was against German supply shipping anchored at Benghazi. With targets ranging from shipping and airfields to road convoys and supply dumps, Howes flew 13 night missions through May and June 1942.

The squadron moved northwest of Cairo in the wake of the allied retreat. He later transferred to 104 (Wellington) Squadron, RAF and having flown 44 operational missions, it appears that Howes took on a navigator training role with 203 Group.

He was promoted to Flight Lieutenant in September 1943 before moving to RAF Aquir in Palestine, (south of Tel-Aviv). On 6 May 1944 Howes embarked for Australia, arriving on 4 June. He was transferred to the RAAF Reserve on 16 March 1945, enabling him to rejoin Qantas. He remained with the RAAF Reserve until at least the late 1950s. During the Vietnam War, he served as a navigator on the Qantas ‘Skippy’ troop flights to and from Vietnam.