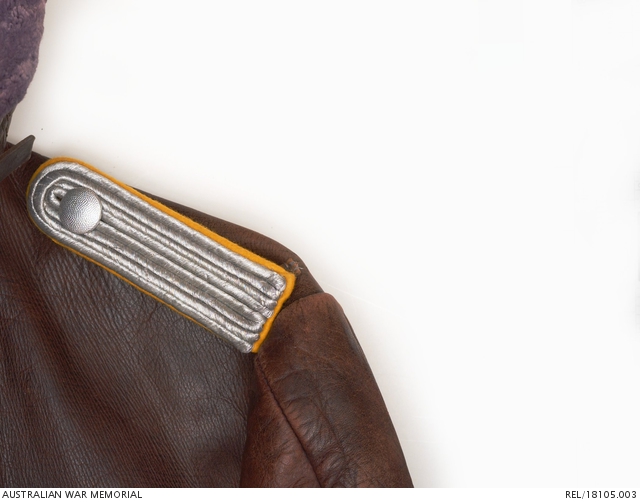 Luftwaffe leutnant's pair of silver-aluminium Russia braid shoulder straps. The two strands of Russia braid are laid flat on the yellow arm-of-service cloth backing board. The strands of braid form a 'U' around a silver coloured metal button, which has a pebbled finish.

Worn by Leutnant Werner G Herrmann, who served with Jagdgeschwader 53 (JG-53), Luftwaffe. Herrmann was a qualified glider pilot before he was conscripted into the Luftwaffe early in World War Two. After further training on powered aircraft he was posted to JG-53, which was equipped with Me109 fighter aircraft. In 1943 he was flying missions against American bombers and fighters in Italy with the 7th Staffel of III/JG-53. Commissioned as a leutnant (lieutenant) in 10 Staffel of III/JG-53 (Me109G-14) in 1944, he was operating from improvised airfields such as Paderborn and Kirrlach, flying missions in defence of the Reich. At the end of the war he was taken prisoner of war by the Americans. He was awarded the Iron Cross 1st and the Day Fighter Clasp in Silver during his career in the Luftwaffe.