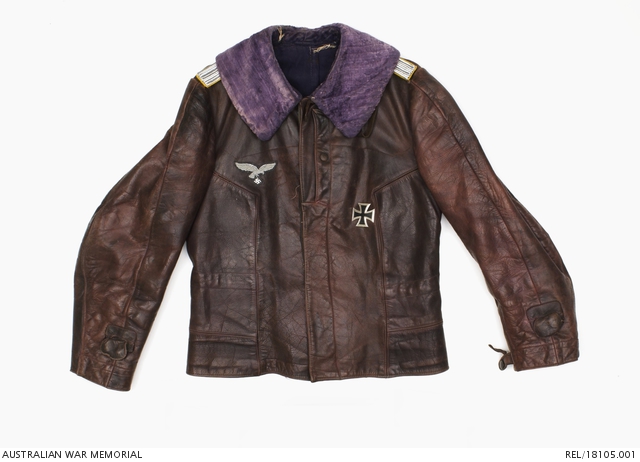 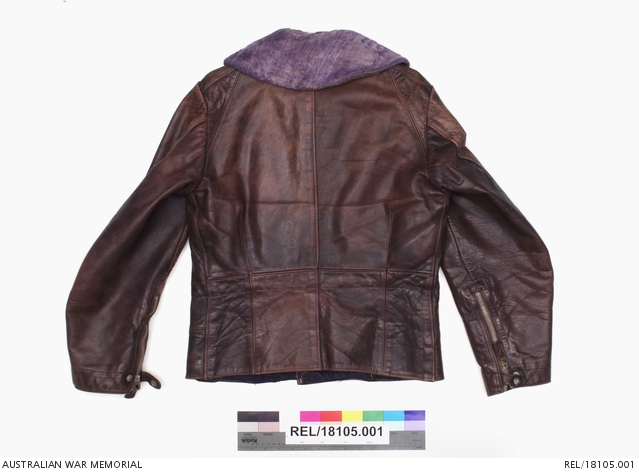 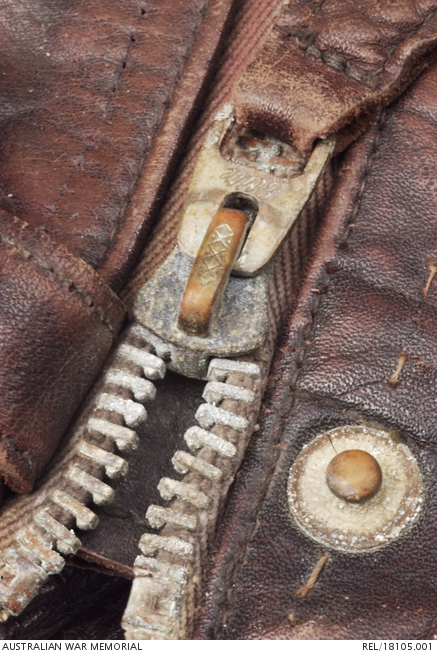 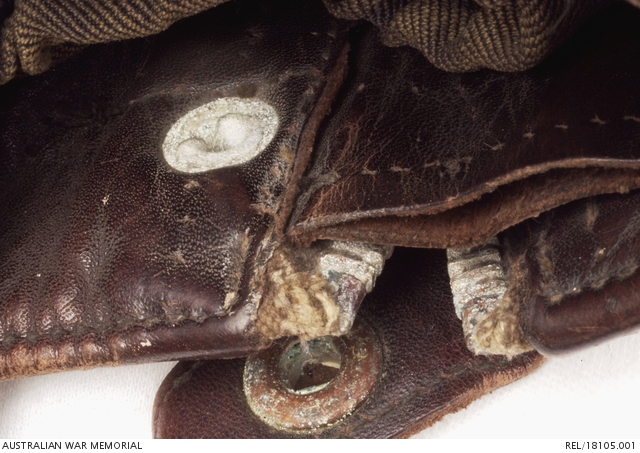 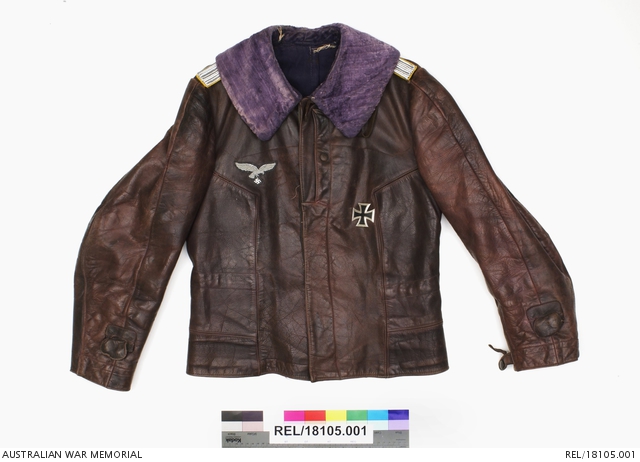 Luftwaffe winter issue (heated?) dark brown leather flying jacket. This single breasted jacket has five concealed blue-grey plastic buttons down the front opening. The wide blue velvet lapel collar can be fastened in the stand position by threading the adjustable strap that is under the left lapel through the ring that is under the right lapel. The silver-aluminium Russia braid shoulder straps are backed with yellow cloth. The national emblem of the Luffwaffe, an eagle with outspread wings clutching a swastika in one talon, is embroidered in silver bullion on cloth on the badge on the right breast. A horizontal map pocket has been let into the left breast between the first and third button. It has a vertical slit opening, fastened with a press stud. The Iron Cross 1st Class is pinned to the breast below it. There is a steel press stud to join the bottom corners of the front panels. Sewn onto the front of both cuffs there is a small flap fitted with the female part of two press studs. There is a 190mm long zipper at the back of both cuffs. An additional section of gathered cotton has been sewn onto the lining inside both cuffs. The jacket is fully lined with dark blue polished cotton and has a drawstring gather sewn into the waist. The narrow vertical panel containing the buttonholes has been manufactured from field grey wool and cotton drill fabrics. A dark brown leather strap is sewn onto the lining of the jacket beneath the left armpit. It extends almost to the bottom hem where it widens into a small horizontally aligned oval shaped flap that is fitted with the male part of two press studs. A concealed electrical cable is attached to its press studs, within the strap. The cable separates into two strands at the top of the strap and they both run through the lining of the jacket to one of the small flaps with press studs on the front of both cuffs. A similiar flap with the female part of two press studs is sewn onto the hem adjacent to the bottom end of the strap.

This jacket was issued in July-August 1944 to Leutnant (Lieutenant) Werner G Herrmann, who served with Jagdgeschwader 53 (JG-53), Luftwaffe. Herrmann was a qualified glider pilot before he was conscripted into the Luftwaffe early in World War Two. After further training on powered aircraft he was posted to JG-53, which was equipped with Me109 fighter aircraft. In 1943 he was flying missions against American bombers and fighters in Italy with the 7th Staffel of III/JG-53. Commissioned as a leutnant in 10 Staffel of III/JG-53 (Me109G-14) in 1944, he was operating from improvised airfields such as Paderborn and Kirrlach, flying missions in defence of the Reich. At the end of the war he was taken prisoner of war by the Americans. He was awarded the Iron Cross 1st and the Day Fighter Clasp in Silver during his career in the Luftwaffe.