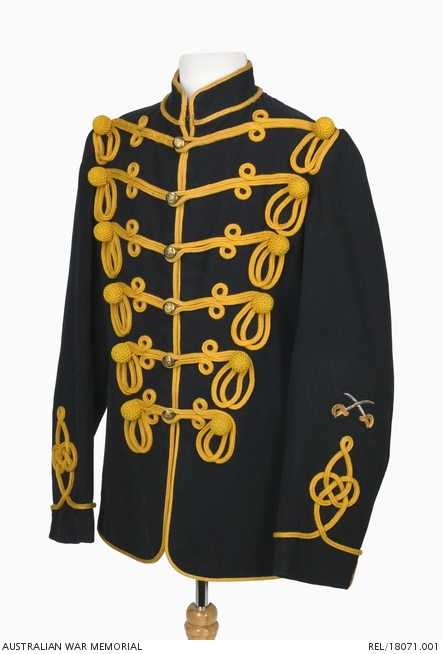 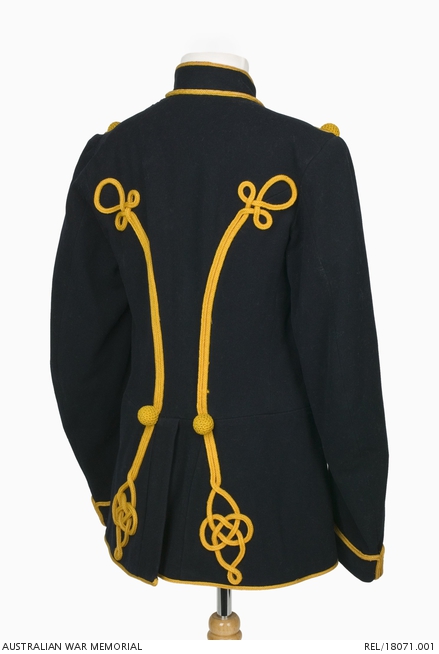 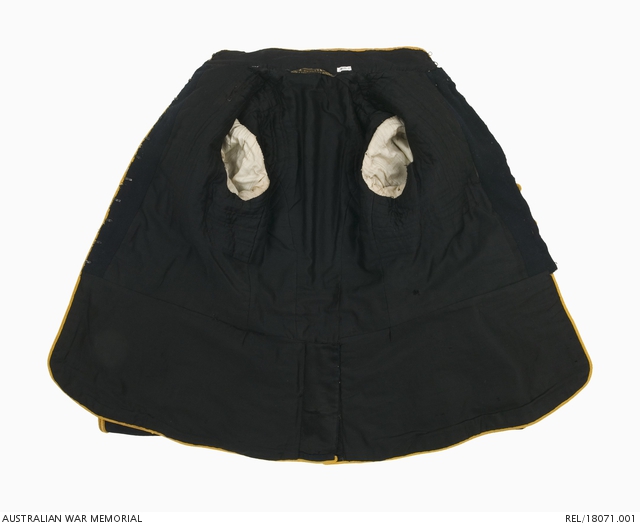 Dark blue wool serge skirted tunic with blue stand collar edged in square worsted yellow Russia braid extending down centre fronts and hem. The front of the tunic is decorated with netted caps and drops in square yellow Russia braid. The front opening is fastened with black ferrous metal hooks and eyes and brass Victorian Military Forces buttons of the 1880-1893 period bearing the 'AUT PACE AUT BELLO' motto and made by 'H.W MARTIN LONDON'. The sleeves are decorated with square yellow braid Austrian knots; the wearer's left sleeve also has a gold and silver bullion embroidered swordsman's badge of crossed sabres, handstitched through to sleeve lining. The back of the tunic has a centre back skirt vent. Back panels and skirt are decorated with double rows of yellow braid, and netted caps at waist seam ending in Austrian knots at skirt hem. The tunic and collar are lined with black cotton twill fabric; the upper section of bodice lining is also quilted. There is a concealed pocket in the lining at left breast. A maker's embroidered label tag sewn to the inside neck reads 'A. BOWLEY & Co COLLINS ST MELBOURNE'. The sleeves lined with white striped cotton twill.

The Melbourne Cavalry Corps was raised in 1901. As a volunteer corps, members provided their own uniforms, saddles and horses. Although also part of the Light Horse, when dressed in this uniform they took on ceremonial roles such as the Guard at the opening of Federal Parliament in Melbourne in 1901. Recruitment for this unit, particularly for officers was apparently slow. In 1901 Lieutenant A Rushall was the only appointed officer. The corps numbered only twenty until a fixed establishment of fifty was alloted in 1903. In 1903 the corps became part of No 6 Squadron 10th Light Horse Regiment. In 1912, all six squadrons of the 10th were united to become the 13th Light Horse, Victorian Mounted Rifles.