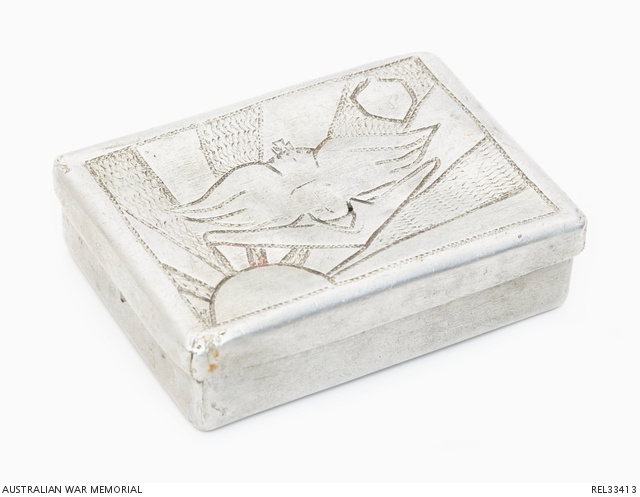 Small aluminium alloy box with separate lid. Lid has been inscribed with a bordered decoration consisting of a rising sun, over which is inscribed a variation of the returned from active service badge, The oval shield at the centre of the box lid contains an image of an anchor (mostly worn away), with a boomerang underneath a crown above and a pair of wings on the sides. A small shield shape has been added to the top right corner. The areas between the sun's rays have been stippled. The box has been constructed from flat sheet, with the corners beaten together. Crudely scratched into the inside of the lid is 'RIVER VALLEY / CAMP / 1942'. The interior of both box and lid has been discoloured by unidentified deposits.

Some prisoners in Singapore made small boxes and decorative items. Many of them utilised scrap aluminium recovered from downed aircraft in the vicinity of POW camps or outside areas where prisoners worked. This example is associated with the service of VX57896 Sapper Francis William ‘Doc’ Davis, born 5 August 1916 at Port Melbourne, Victoria. David was employed at soap makers J Kitchen and Sons (where his father and sister also worked) and played second grade football for Port Melbourne and Garden City. He enlisted into the Second AIF on 17 June 1941. On joining the army he briefly served with a Pioneer unit before transferring to the 2/10th Field Company, as he wanted to be a sapper and be with his Port Melbourne mates. Davis embarked for Singapore as part of the 8th Division and shared the fate of many - taken prisoner and being imprisoned at Changi in Singapore. During this period the Japanese used him as a glazier, replacing broken windows. Where they could, the prisoners would smash windows in order to be kept in the city to make repairs. This allowed them to obtain more supplies to take back to the camp. Davis regularly went through the wire at night to trade with the locals and steal supplies from the Japanese to bring back to camp. He was also a real character with a marvellous sense of humour and wit and sang in a number of POW camp concerts. Davis was assigned to F Force and worked on the Burma Thai railway where he contracted cholera and despite being given no chance of recovery, survived his illness. Upon his recovery, he worked as a water carter, bringing water for use in the camp and its hospital. On one occasion he was bashed with a rifle butt by a guard for helping a sick mate carry a bucket of rice. Davis was returned to River Valley Camp in Singapore and survived his captivity, returning to Port Melbourne where he married. In later years he coached a Garden City football team to a premiership.