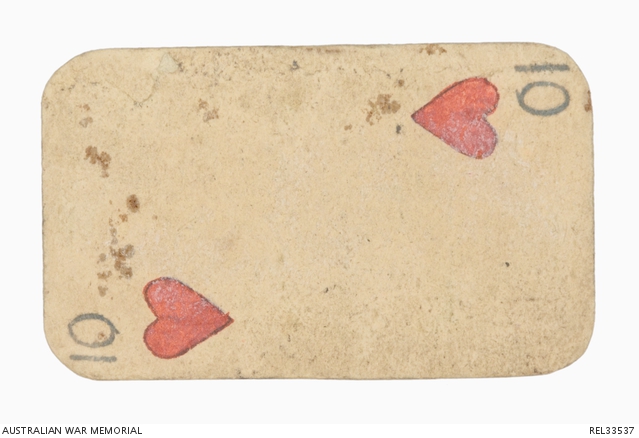 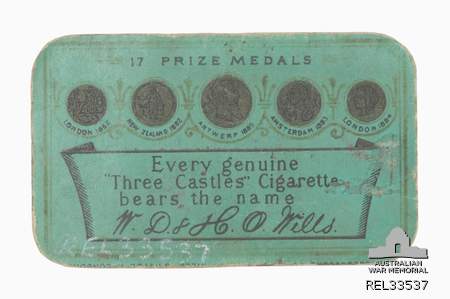 Carboard panel cut from a green packet of WD & HO Wills 'Three Castles' cigarettes to the shape of a playing card. The obverse has been marked as the 10 of hearts, with the hearts coloured red.

Ten of Hearts playing card made from a packet of WD & HO Wills 'Three Castles' cigarettes. One of only a few cards surviving from the original pack made by VX57896 Sapper Francis William ‘Doc' Davis, born 5 August 1916 at Port Melbourne, Victoria and designed to fit in a small aluminium box also handmade at River Valley POW Camp, Singapore (see REL33413). Employed at soapmakers J Kitchen and Sons (where his father and sister also worked) Davis played second grade football for Port Melbourne and Garden City, before enlisting from his home suburb on 17 June 1941. His nephew writes 'On joining the army in 1941, he served briefly with a Pioneer unit before transferring to the 2/10th Field Company, saying 'I wanted to be a sapper and be with my Port Melbourne mates'. Davis embarked for Singapore as part of the 8th Division and shared the fate of many, being imprisoned at Changi. During this period the Japanese used him as a glazier, replacing broken windows in Singapore. Fellow POW Frank Stabback recalls 'It was a pretty good job. When we could, we kept smashing a few more windows so we could stay in the city, as we were able to obtain more supplies to take back to the camp. Doc Davis was an extremely brave and courageous man who constantly went through the wire at night to trade with the locals and steal supplies from the Japanese to bring back to camp. … He was also a real character with a marvellous sense of humour and Aussie wit and is remembered for his wonderful singing ability in a number of POW camp concerts.' Davis was assigned to F Force and worked on the Burma Thai railway where he contracted cholera. Despite being given no chance of recovery he survived. Upon his recovery, he worked as a water carter, bringing water for use in the camp and its hospital. His nephew relates that he 'still bore a scar across his nose from being bashed with a rifle butt by a guard for helping a sick mate carry a bucket of rice.' Davis was returned to River Valley Camp in Singpaore and eventually returned to Port Melbourne where he married; in later years he coached one Garden City AFL side to a premiership.