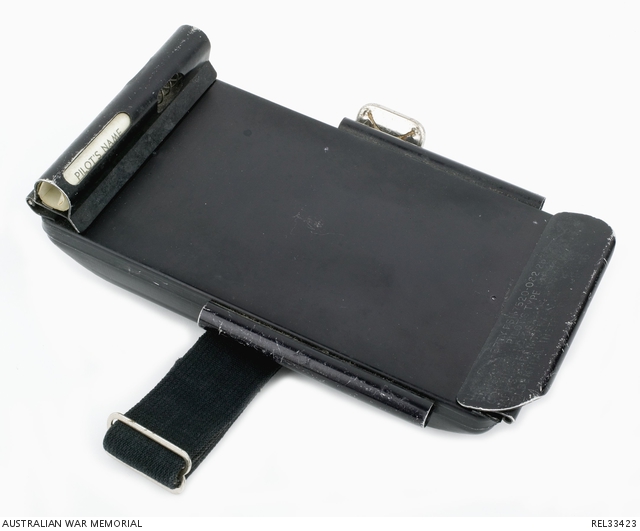 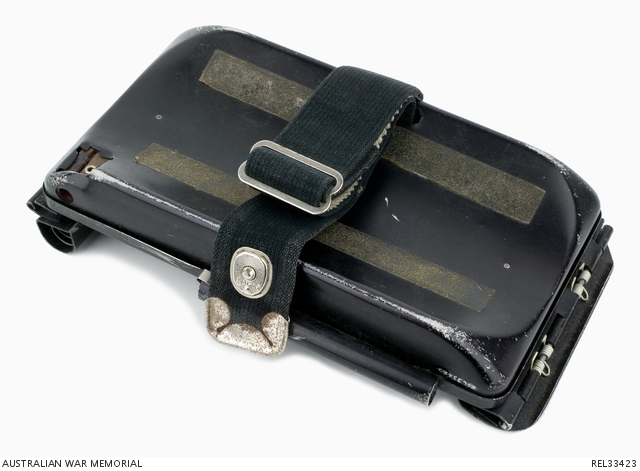 Pilot's strap on thigh clipboard made from aluminium, paper and elasticised material. A pencil sharpener is built into the reverse upper right side. Two 172 mm long bands of glue remnants are on the reverse side , this indicates that some form of padding was once fitted to the object. An elasticised retaining band and eyelet measuring 372 mm long is attached to the side of the clipboard. A silver coloured fastening stud is on the opposite side.

Used by O55985 Flying Officer (later Wing Commander) Brian Hammond while serving with 2 Squadron Royal Australian Air Force (RAAF) flying Canberra bombers in Vietnam. Brian Greatorex Hammond was born at Perth, Western Australia on 2 September 1937. He first served in Vietnam with RAAF Transport Flight Vietnam from 24 August 1964 to 12 May 1965. He later served in Vietnam with 2 Squadron from 22 October 1969 to 25 June 1970. Hammond was mentioned in despatches. The knee pad had three uses: Firstly, to copy down the TACAN co-ordinates of the rendezvous point with the forward air controller (FAC) at the briefing. Secondly, to copy the salient details of the target when in the target area. The FAC would give the target description, attack heading, any known disposition of ground fire, friendly troops and enemy troops, whether the bombs were to be dropped in singles or multiples and the spacing, and whether the bombs were to be instantaneous or delay fused. Thirdly, on completion of the strike, the Canberra/s would hold high in the area above ground fire, while the FAC carried out a bomb damage assessment (BDA). The FAC would then relay the BDA, which would be copied on the knee pad for the intelligence briefing.