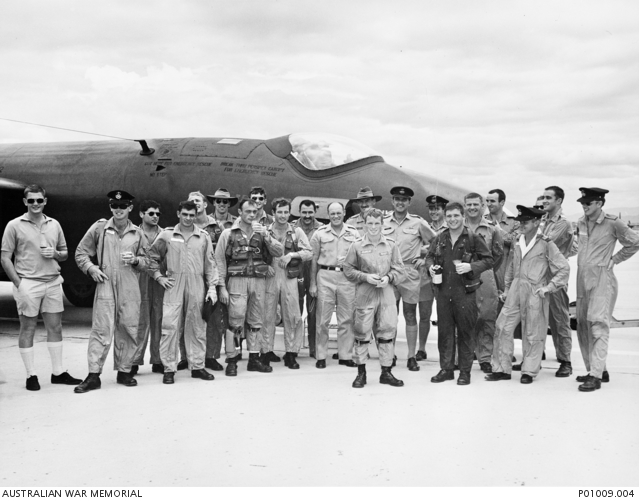 Phan Rang, Ninh Thuan province, Vietnam, 1970-01. Informal outdoors group portrait of officers of No. 2 Squadron RAAF gathered on the tarmac at Phan Rang Air Base for a 'hose-down' celebration for the crew of one of the squadron's Canberra B20 light bombers who have just completed their last bombing mission in Vietnam. In the celebration, which became something of a tradition with No. 2 Squadron at Phan Rang, a fire tender met the crew on their arrival back at base after completing their final mission and hosed their aircraft down. The men are (left to right): Flying Officer (FO) Allan Clancy, pilot and Squadron Operations Officer, who is wearing the standard form of undress for a rest day of casual shirt, shorts and long socks; Pilot Officer (PO) Desmond Hyde, navigator; PO John Bennett, navigator; PO Ross Hardcastle, navigator; PO Robert Cuttriss, navigator; PO Allan Curr, navigator; Flight Lieutenant (FL) Brian Hammond, pilot; PO Richard O'Ferrell, pilot; FO Robert Moloney, navigator; Flight Lieutenant Anthony Taylor, navigator and Squadron Bombing Leader; Brigadier General Wallace L Clement, of the United States Military Assistance Command Training Directorate; Squadron Leader (Sqn Ldr) Brian Sweeney, pilot and Flight Commander, No. 2 Squadron; PO John Kennedy, pilot, who is one of the two crewmen who are receiving the 'hose-down'; Wing Commander Jack Boast, CO of No. 2 Squadron, who is wearing the traditional 'non-flying' uniform of short-sleeved shirt, shorts and long socks; FL Robert Howe, navigator; FO David Palmer, navigator and the other recipient of the 'hose-down', who is holding a bottle of champagne; Sqn Ldr Frank Lonie, navigator and Navigation and Bombing Officer, No. 2 Squadron; FO Michael Herbert, pilot, who was soon to be posted as missing, presumed killed in action (KIA); Sqn Ldr Arthur Barnes, DFC, AFC, pilot and Flight Commander, No. 2 Squadron, who is wearing a flying scarf; PO Harold Bradford, pilot; PO Barry Carpenter, pilot. Most of the officers are wearing flying suits, mainly of the older cotton variety, and are not drinking as they expect that they will soon leave on a flying mission. FO Palmer is wearing one of the newer fire-resistant Nomex flying suits. FO Hammond and PO Kennedy are wearing so-called 'bowyangs' around their legs, items of equipment that attached their legs to the ejection seats of their aircraft, such that their legs would not be severed by the aircraft's instrument panel in the event of an ejection. The Canberra B20 light bomber flown by Kennedy and Palmer stands at the rear of the group. (Formerly 200254)