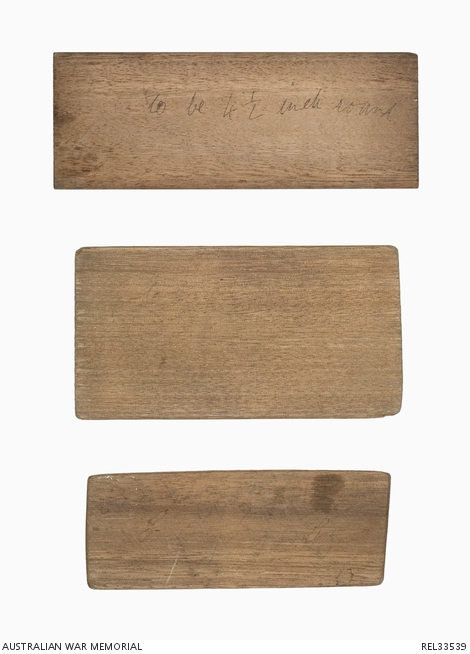 Associated with the Second World War service of Jane Harriet Bray, a member of the Kogarah (NSW) Women’s Australian National Service (WANS). Bray joined the WANS very early in the war, gaining her St John's Ambulance Association First Aid certificate on 27 November 1940 and her National Emergency Services Air Raid Precautions certificate on 1 July 1941. Bray also served with the Kogarah Fire Brigade as a member of the Women's Fire Auxiliary, NSW Fire Brigades, receiving her certificate of appointment on 5 August 1941. She used the camouflage netting making tools frequently, making, according to her granddaughter, ‘hundreds of nets during the war, as well as knitting socks and balaclavas. Grandfather (Joseph Bray) was a fruiterer who made regular deliveries in his truck, but lost this job when his truck was commandeered by the authorities. He later found employment making ammunition at Mascot.' The donor, aged about 8 when the war started, recalls her grandmother teaching her how to use the netting tools and they often spent time making nets together ‘out in the back shed'. Two handmade congratulatory cards from the Kogarah WANS confirm this - one for 50 nets, dated 1943, and one for 200 nets, undated.