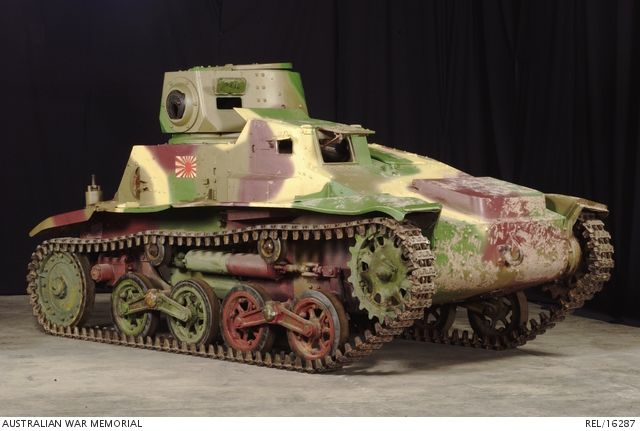 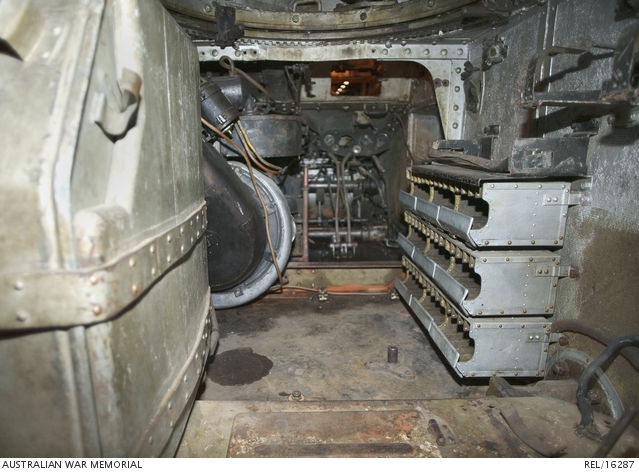 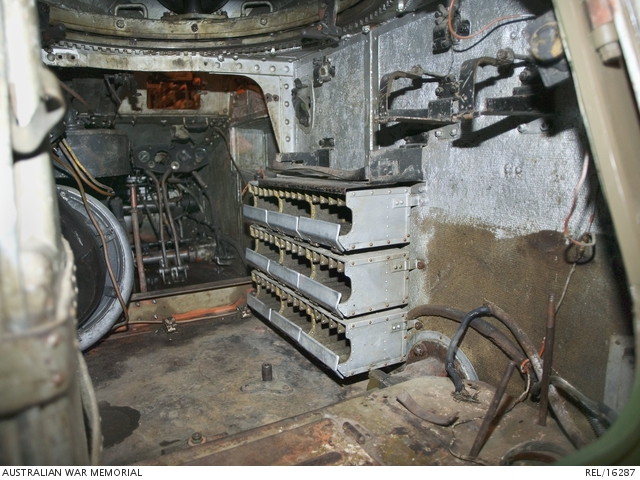 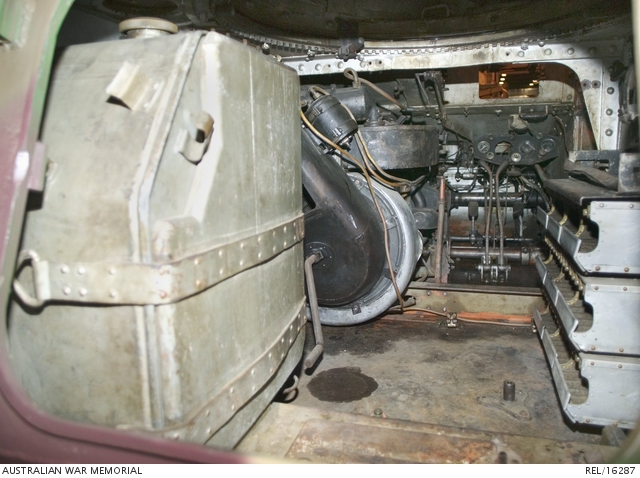 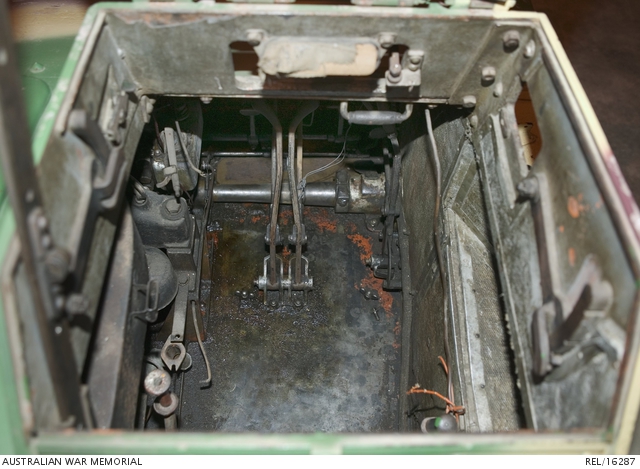 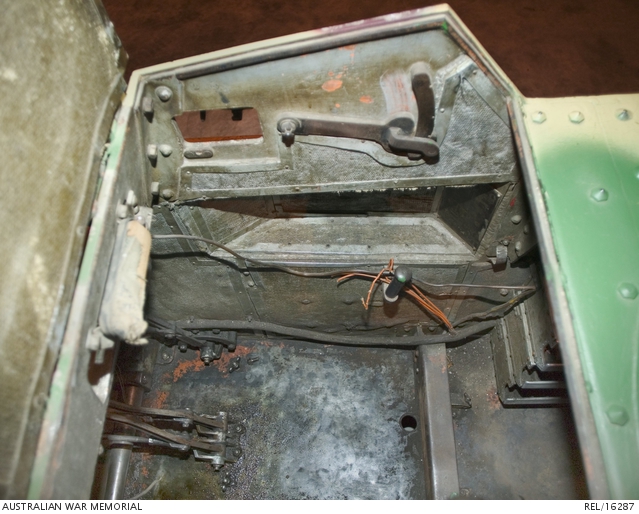 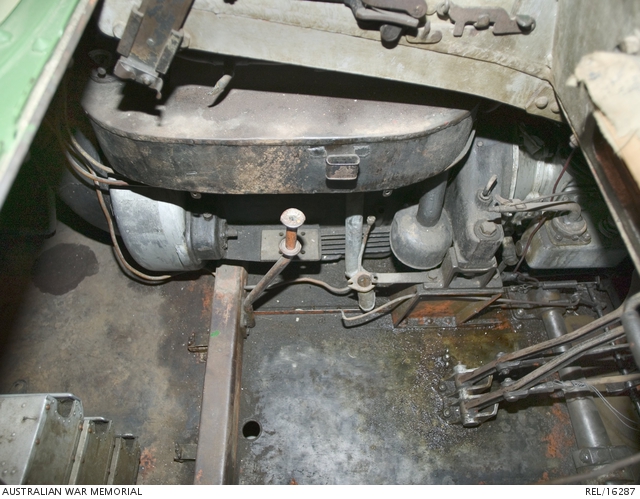 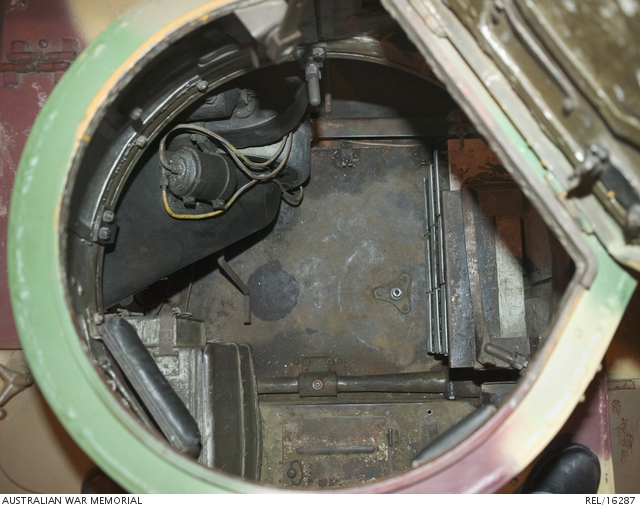 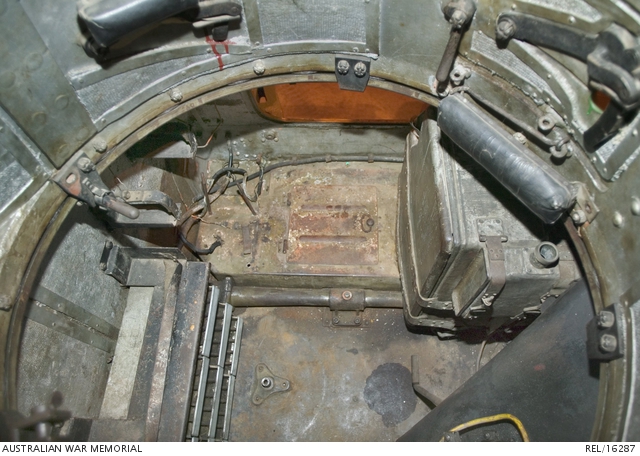 Camouflaged, Japanese, Type 94, two man tankette of welded and rivetted construction. The vehicle's serial number is '88'. The Australian Army Military History Section allocated the case number 'S125' to this vehicle after its capture and transfer to Australia. This number is painted on the outside of the rear cargo door. The vehicle has been camouflaged in a four colour pattern consisting of sand yellow, olive drab, green and brick red. The drive sprockets are mounted at the front of the vehicle, with four rubber tyred road wheels and two return rollers on each side. The trailing idler wheels are at the rear. The turret is offset to the starboard side of the hull and is missing the machine gun.

On the right, towards the back of the tankette, are the initials 'CA'. Scratched underneath the paint of the Japanese rising sun flag is VX4486 MCHALLORAN / BALIK' [VX4486 John Frederick O'Halloran]. The service number 'VX4486' is also scratched into the turret. Scratched into the back hatch of the turret is ' A Nicholl / HR McLift [sic] / BNMA. On the side of the turrett is scratched 'VX145995 / SPR LY ESS DG' [VX145995 Sapper David Gordon Lyness 2/2 Aust Railway Construction Company'] and 'BERNARD [sic] RAN'.

The Tankette Type 94, Model 2594 was based on the British Carden-Loyd Mark VI universal carriers of which six were purchased by Japan in the late 1920s. As a result of trials with these vehicles the Japanese decided to develop a similar vehicle. After successful trials in Japan and China the vehicle was standardised as the Type 94 tankette (US sources refer to it as the Type 92). It entered service in 1934. The primary role of the Type 94 was to carry supplies in the battlefield area and also serve in the supplementary reconnaissance role for which it was totally unsuited as its body armour could not withstand ordinary rifle bullets. It was also often used to tow a tracked ammunition trailer in a fashion similar to contemporary British and French tankettes of the period.

The hull of the tankette is of riveted construction with the engine at the left front and driver on the right and the small turret at the rear of the hull. A large door is provided in the rear of the hull so that stores can be loaded quickly. The suspension consists of four bogies (two on each side), which are suspended by bell cranks resisted by armoured compression springs placed horizontally, one each side of the hull, externally. Each bogie had two small rubber-tired road wheels with the drive sprocket at the front and the idler at the rear. There were two track return rollers on each side. The vehicle was powered by a 35 hp air cooled petrol engine. It was operated by a crew of two, a driver and a crew commander/gunner, in cramped conditions, and was used by the Japanese to pull a tracked trailer carrying supplies to the battlefield or as a reconnaissance vehicle. The round turret contained a 6.5 mm Type 91 machine gun in a ball in a ball mount. The Type 94 was not built in very large numbers and was replaced by 1940 on the production line by the Type 97 tankette.

'A' Company, 2/9th Battalion, AIF captured this tankette, numbered 88 , in the town of Klandasan, Balikpapan, Borneo on the evening of 1 July 1945. That morning the 2/9th landed in reserve as part of Operation OBOE TWO, the last major amphibious assault of the Second World War. Within an hour of landing, they relieved two companies of the 2/10th Battalion, who had successfully captured their objectives. The 2/9th then began clearing the residential area of Klandasan.

At 6pm 'A' Company, with support from 7 Battery 2/4th Field Regiment, one troop of tanks and a flamethrower tank, attacked Santosa Hill facing negligible opposition from the Japanese. During this attack they captured the tankette, a dual purpose gun and medical supplies. The tankette was the first of its type captured by Australian forces in the SWPA. Some Australian soldiers scratched inscriptions into the tankette s paint. The body of the tankette was painted over, but among the few legible inscriptions is that of NX114685 Trooper Brian Bourke, 1st Australian Armoured Regiment, who was one of the tankette s test drivers after its capture. Other legible inscriptions include, VX57861 Sapper Thomas Neville Bunbury, NX91256 Sapper Robert McBlane and VX4486 John Frederick O'Halloran.

The tankette was shipped to Australia aboard SS Winchester Victory in December 1945.