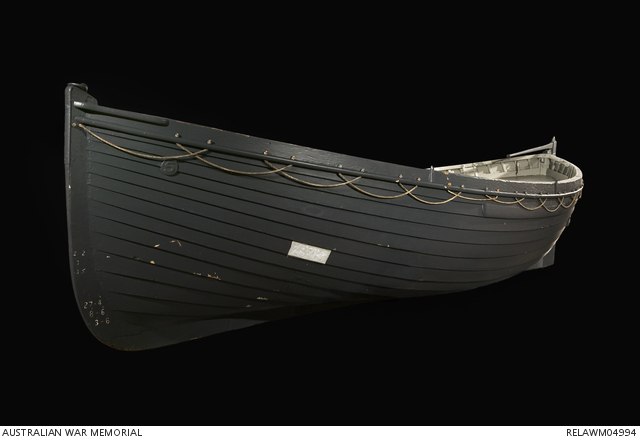 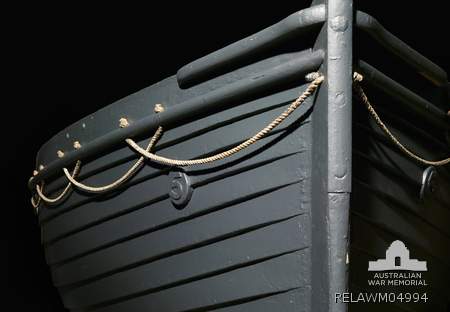 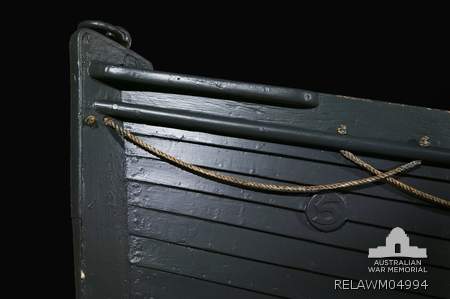 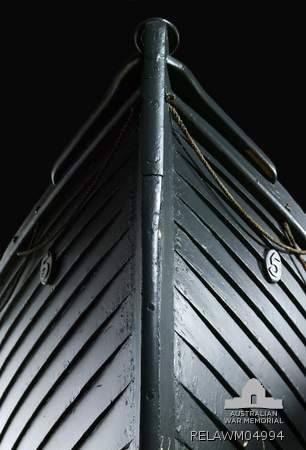 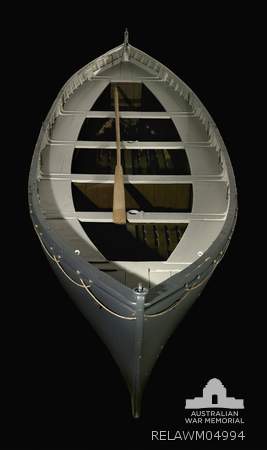 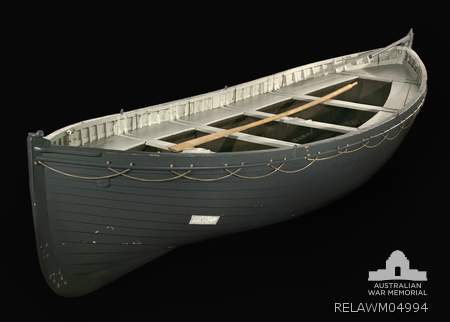 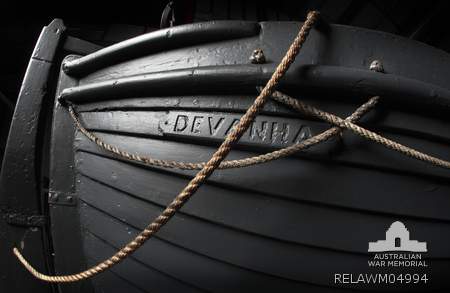 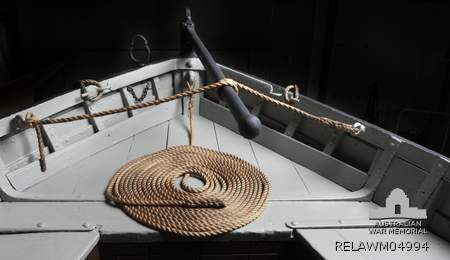 The number 5 timber lifeboat from the P&O ship SS Devanha. The lifeboat is of clinker construction and has single bow and stern posts connected to a heavy exposed keel. The posts are made up of several fitted sections. Each side has twenty planks. The nameplate 'Devanha' is found on both the Starboard side stern and Port side stern. As well as the nameplate, the number '5' is found on both the starboard side bow and port side bow of the boat. There is also an external lead patch fitted onto the Port bow. Internally the structure consists of single ribs running from the gunwale down to the keel. The keel is reinforced with a heavy keelson that provides a socket mounting for the mast and several other socket fittings for unknown elements. The boat can be propelled using either oars via rowlocks mounted on the gunwhale, or sail. During the Gallipoli landing the boats each carried over 30 soldiers with their equipment and were rowed to shore. Within the hull there is a narrow deck with boxed in sides which runs at the same level around the interior approximately 20cm below the level of the gunwale. This decking is boxed in with tongue and groove boards which run down to the internal frames in the bilge, and inside this structure are a series of copper sheet flotation tanks, lining the interior space. There are four cross boards at this deck level which provide reinforcement for the structure at the top and also seating for use whilst rowing. The second board from the bow also has fittings to allow the mast to be erected. The bilge of the boat is protected by raised decking sections in the extreme fore and aft, each approximately 2m long. The central part of the bilge is protected by two loose gratings, one on the Port side and one on the Starboard. The planks are attached to the frame using clenched copper alloy fasteners. Major structural elements are bolted together with ferrous metal fasteners, some of which are galvanised. The replacement sections of deck, vertical timbers and the gratings have all been secured with ungalvanised ferrous metal nails.

This timber lifeboat is from the P&O SS Devanha known as Troopship A3 at the time of the Gallipoli landing in 1915. The Devanha served as both a troop transport ship (HMT) and later hospital ship (HMHS). It was used by 12 Battalion AIF, 3 Field Ambulance and 3 Infantry Brigade Head Quarters during the landings at Gallipoli in 1915. SS Devanha was built in 1905-6 by Caird and Co, Greenock, for the Peninsular & Oriental Steam Navigation Company (P&O). Newly registered on 31 Jan 1906, the ship was placed on the UK to India and Far East run before being pressed into military service in 1915. All requisitioned vessels continued to be manned by their normal P&O staff of officers and their peacetime P&O crews. On 25 April at 2pm The Devanha now also known as Troopship 3 sailed from Mudros Harbour and proceeded to the Island of Imbros, anchoring off Kephalos Harbour. Devanha was A5 in the convoy, Berth 4 of the Echelon landing force.

At 11pm the order was given for the troops to move into destroyers, which had crept up on either side of their respective transports. As the Devanha carried only one company of the 12th, some medical officers, stretcher-bearers and others of the 3rd Field Ambulance and the 3rd Infantry Brigade Head Quarters only one destroyer, the HMS Ribble, came alongside her. The historian Charles Bean noted that: 'The night was so still that the Devanha's captain ordered 'Lower the Gangway.' Down this the troops ('A' Coy, 3rd Fld Amb and H.Q) filed on to the destroyer's deck in half the time that had been required with the rope ladders on which they had practice for nearly two months. Five minutes before midnight, the Ribble, with her decks crowded, and towing behind her the Devanha's empty lifeboats, left the transport. The HMS Ribble headed toward the landing beaches with the six other destroyers, all similarly loaded. The boats from HMS Ribble landed on the beach around the point from Anzac Cove. This landing was part of the initial wave and was timed to arrive at the beach at about 4.30 am. The landing position was almost at the extreme north (or left) of the Divisional front, at the foot of the well known landmark on Russell's Top known as 'The Sphinx'. This portion of the beach was under direct machine-gun fire, apparently coming from the lower slopes of Walker's Ridge or perhaps further north from the vicinity of Fisherman's Hut.

After the first wave of troops landed the Devanha steamed up the coast as a feint to draw enemy fire. That evening the vessel evacuated her first load of casualties and began service as a hospital ship. As a hospital ship HMHS Devanha transported sick and wounded troops from the battle field to hospital bases. Originally hospital ships were ordered to take serious cases while transports were to take the lightly wounded, but the confusion which resulted after the initial landing - and the large numbers of casualties - meant this system soon fell into disarray. The HMHS Devanha and other hospital ships provided emergency treatment while evacuating the troops directly to Egypt, from where some would be sent to Malta and England. Devanha continued with these duties until the end of the campaign, and the P & O history notes that the vessel was the last hospital ship to leave the Dardanelles.

After the landing the AWM lifeboat was returned to the Devanha where it remained in use until 1919. A passenger alerted the AWM to the existence of the boat, and after negotiations with P & O the craft was donated to the Memorial in late December 1919. Documentation provided by P&O confirmed that lifeboat No. 5 was used in the Gallipoli landings.