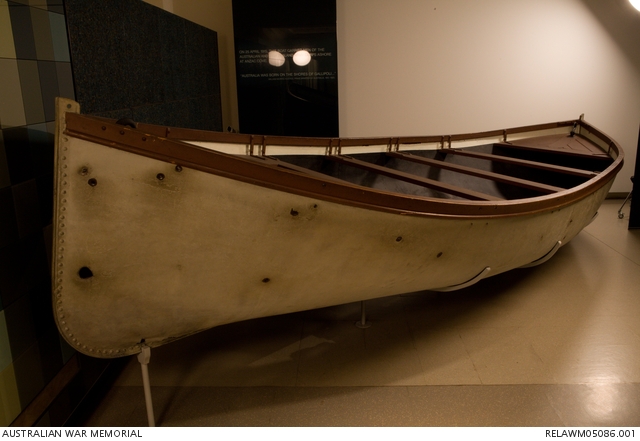 The number 6 white painted steel lifeboat from the British transport ship HMT (A33) Ascot. The lifeboat has a rivetted beam along its keel, and the steel sheets that the hull is constructed from are also rivetted together. A plank forms each one of the four simple thwarts (seats), which are attached to the hull at either end by a 90 degree angled steel bracket. The top of the bow and the stern are decked with wood. A hook protrudes from the decking at both ends, so that a lowering cable can be attached. There are several bullet holes in both sides of the bow, in the middle of the port (left) side, and more in the stern on the same side.

This steel lifeboat is from HMT (A33) Ascot and was used by 13 Battalion AIF during the landings at Gallipoli on 25 April 1915. SS Ascot was owned by the Britain Steamship Company Limited and managed by Watts Watts & Company Limited before she was pressed into military service as a transport. She conveyed troops from the Australian and New Zealand Army Corps to Gallipoli. Two of her 24 lifeboats were steel. 13 Battalion started disembarking after 9.30 pm on the evening of 25 April 1915. The task of landing 13 Battalion troops from the Ascot was a three-phased affair. Firstly, the Ascot's lifeboats were lowered and hitched to the torpedo boat destroyer (TBD) HMS Chelmer. Secondly, troops climbed the rope nets onto the Chelmer, which gave them a fast run into the beach, and thirdly, the troops disembarked into the Ascot's lifeboats which they then rowed ashore. The battalion went ashore under enemy fire, with covering fire provided by HM ships Queen Elizabeth and Chelmer. Once ashore, the battalion went straight into the front line. This lifeboat became stranded on the beach at Anzac Cove and remained there until 14 September 1921, when it was dispatched to Australia. The Imperial War Graves unit that recovered it from the beach, had to cut it in half to get it around the sharp curves in the roads they had built along the hills. The only marking on the boat was the number '6'.