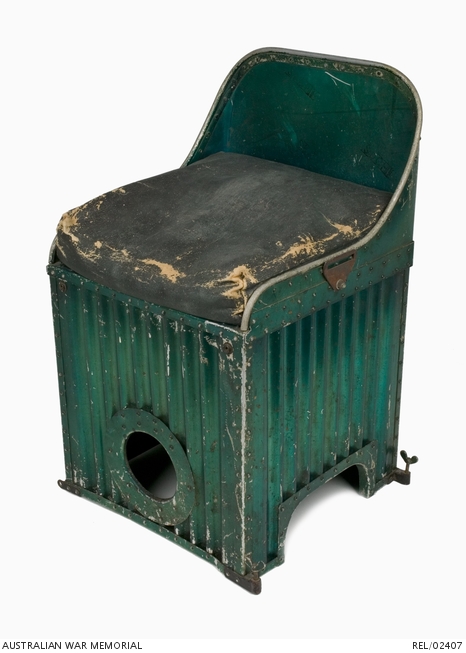 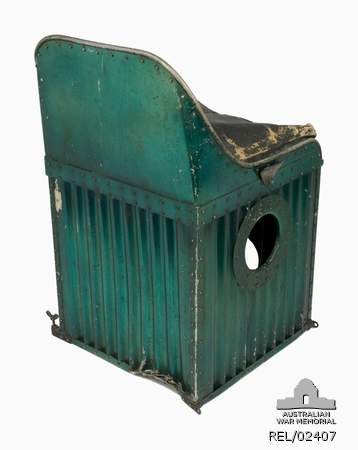 The seat is a box-shaped, aluminium structure painted in overall 'aotake' interior green. It has a short back rest and a padded top made from black rubberised material. Markings stamped onto the metal are 'SDCHI'.

This crew seat was recovered at Koolpinyah Station (east of Darwin) from a Japanese Mitsubishi G4M1 Model 11 "Betty" bomber (aircraft serial 5414, tail code T-359) that was shot down in a historically significant event over mainland Australia.

On 23 November 1942 the northern Australian garrison city of Darwin was night raided by six flights of Japanese aircraft. Squadron Leader Richard 'Dick' Cresswell, the Commanding Officer of No.77 Squadron Royal Australian Air Force flying a P-40E Kittyhawk attacked one flight of three bombers. One bomber broke away and he pursued it. Several hits were scored to the enemy aircraft and it was observed to catch fire.

Cresswell again attacked from above the rear starboard quarter and at 18,000 feet the enemy blazed fiercely and suddenly exploded. The wreckage was scattered over a 1 1/2 mile area. The Material Field Officer RAAF inspected the wreckage from which the seat was recovered and reported that the bomber contained certain previously unknown modifications. He described it as a 'Betty, improved type 1 medium bomber". He gave Creswell the seat as a souvenir. The results of RAAF Intelligence's investigations on this aircraft are included can be viewed in file AWM54 - 423/4/92, which confirms that the aircraft serial was 5414.

The names of the nine aircrew killed onboard Betty T-359 were :

Their bodies were buried in Darwin and after the war, moved with Japanese permission to the official Commonwealth War Grave Cemetery at Cowra New South Wales.

The Memorial holds several other pieces of this historically significant aircraft in the National Collection, such as data plates off various components which were studied by Allied intelligence.