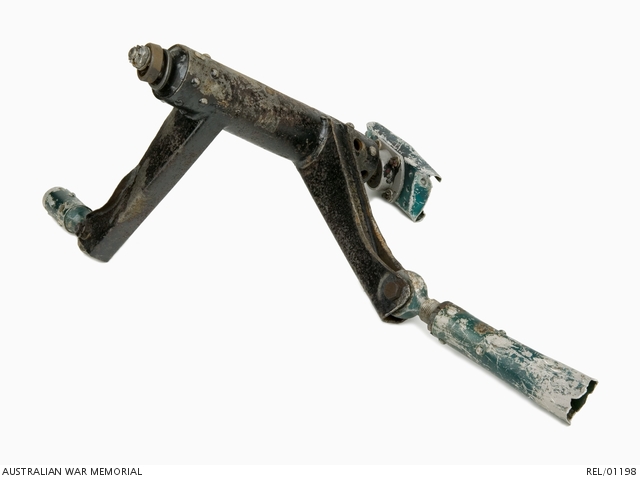 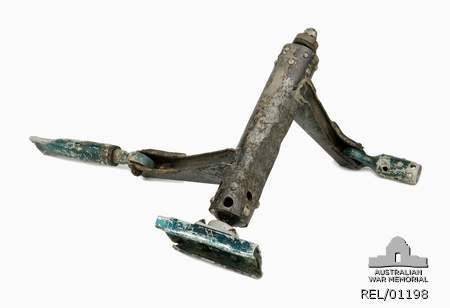 Control horn made of aluminium from a crashed Mitsubishi G4M1 'Betty' bomber. The component is painted in a protective layer of clear blue-green primer known as 'Aotake' used on the interior finishes of Imperial Japanese Navy aircraft.

This flying surface control actuating mechanism was recovered from the wreckage of Admiral Yamamoto's Betty bomber on September 1980. Admiral Yamamoto conceived and directed the historic Japanese attack on 8 December 1941 at Pearl Harbour in Hawai'i. He was the acting Commander-in-Chief of the Combined Japanese Fleet at the time of his death.

Yamamoto was killed when the Mitsubishi G4M1 Type 11 'Betty' bomber aircraft (manufacture Number 2656 and tail code T1-323) in which he was travelling was attacked by American fighters flying from Guadalcanal and shot down over Bougainville on 18 April, 1943. United States Army P-38G Lightning fighter planes were directed as part of 'Operation Retribution' to make the long-range interception after U.S. Intelligence officers had succeeded in decoding a Japanese cypher which outlined the Admiral's proposed itinerary to Bougainville and the Northern Solomon Islands airfield on Ballale island.