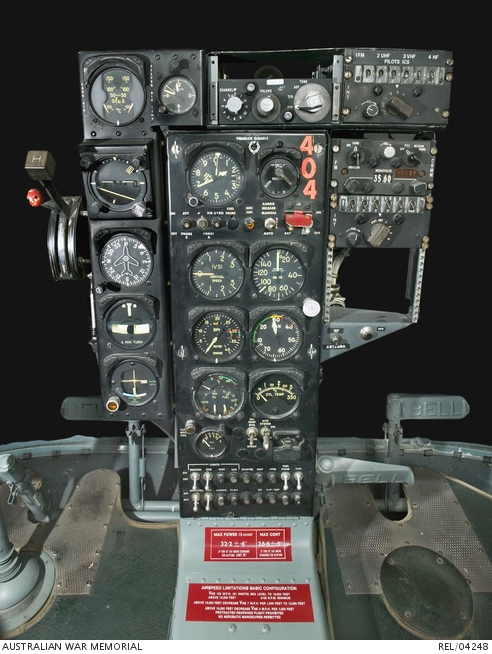 The Bell 47G-3B-1 Sioux light reconnaissance helicopter was a three place machine powered by a Lycoming piston engine. It is fitted with dual controls and three seats. The airframe is constructed of aluminium alloy in the main fuselage while the tail boom is fabricated from steel tube. The main and tail rotors have two blades. The aircraft is equipped with a single M60 machine gun.

The engine is a Lycoming TVO-435-25-DIB horizontal piston powerplant, serial number L1050-52. For display the aircraft has been repainted in Vietnam era green camouflage, with both cabin doors removed and a stretcher platform fitted.

This aircraft was used in South Vietnam by 161 Reconnaissance Flight, later known as 161 (Independent) Reconnaissance Flight (IRF), on visual reconnaissance missions. A total of 37 Sioux were used in Vietnam from September 1965-September 1971 and are believed to have been allocated to helicopter support for every major Australian operation. By the end of the war the Sioux had flown a total of 66 069 sorties with a total flying time of 43 911 hours. A1-404 arrived in South Vietnam on 7 June 1966.

The aircraft type was commonly known as 'possum' whilst in service with the Australian Army. Many of this aircraft's missions were extremely hazardous and it came under direct small arms fire from the enemy. One of the most notable missions carried out by A1-404 occurred during Operation Renmark on 21 February 1967. An Australian M113 armoured personnel carrier (APC) from 5 Battalion Royal Australian Regiment inadvertently entered a mine field and ran over an improvised mine. Five men were killed and a number wounded. Personnel from a following vehicle came in to assist the wounded and set off an M16 mine which had been left by Vietcong forces. Another two men were mortally wounded, and a large number of other men were wounded.

A1-404, piloted by 18548 Captain James Douglas Campbell, was used to fly a medical officer to the scene and was landed numerous times to evacuate wounded men. Campbell was later awarded the Distinguished Flying Cross (DFC) for his actions. The Sioux continued in operational service until its return to Australia on 25 September 1968 when it was allotted to 1 Aviation Regiment in Queensland. In December 1971 it was transferred to 2 Base Ordnance Depot (BOD) in Melbourne, where it remained until February 1978. Later that year it was offered to the Australian War Memorial.

After renovation and repainting to Vietnam markings A1-404 departed from the Army School of Aviation in Oakey Queensland on 12 June 1979, piloted by (now) Major Campbell DFC. His flight took him via Casino, Coffs Harbour, Taree, Williamtown, Holsworthy and RAAF Base, Fairbairn. It landed on the lawns of the Australian War Memorial on 14 June 1979, where it was officially handed over by the Department of Defence.