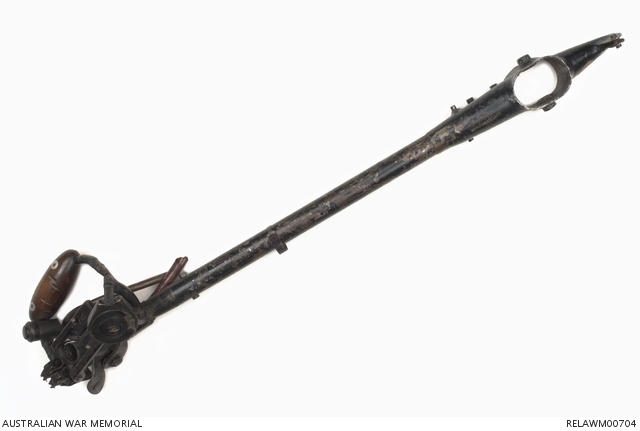 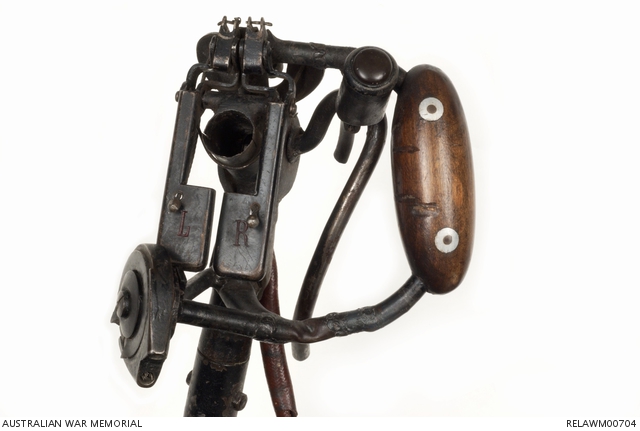 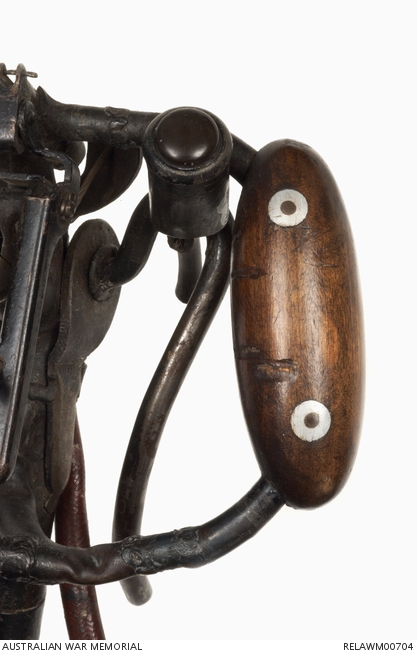 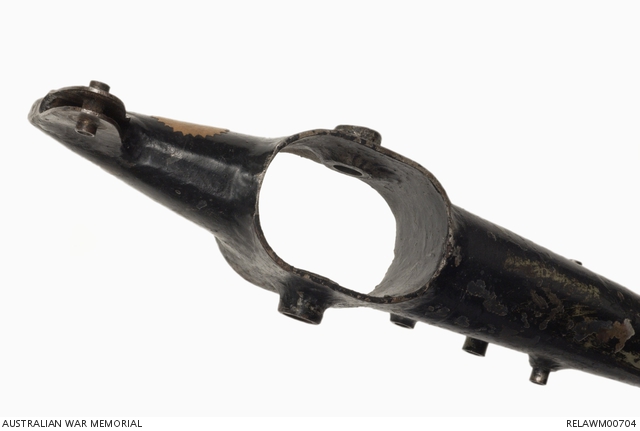 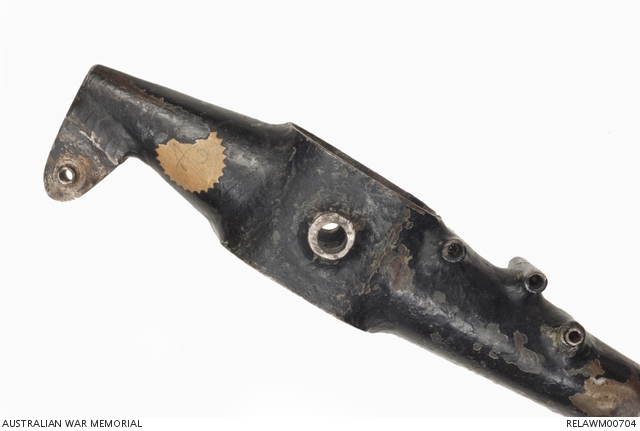 Control column from a Fokker Dr I aircraft, serial No 425/17. The head of the control column has been twisted / distorted to the right about forty-five degrees and slightly upward. It has at least two coats of paint, the under-coat of which is pale grey/green, and the later more dominant top coat is black. A 130 mm length of red/brown reinforced rubber hose is attached to the back of the head of the control column. The unattached end is torn. A 50 mm length of rubber clad cable and a small ragged grimy piece of fabric are attached to the back of the black plastic(?) 'blip' button. The cable has been broken or cut off.

Several crude welded repairs have been made to the framework for the right-hand handgrip. The handgrip is manufactured from wood that is attached to the framework of the control column by two rivets that appear to be partially made from aluminium. The handgrip for the auxiliary hand throttle on the left side of the control column is missing. At the point where it was attached to the top of the 'Bowden' housing, the metal surface is fractured.

The 'Bowden' housing contains the ends of broken steel cables that have retainers made from lead. The housing has apparently been rotated ninety degrees towards the back of the aircraft, because the cables do not leave the housing downwards at forty-five-degrees towards the front of the aircraft as they should. The machine gun firing toggles are marked 'L' on the left and 'R' on the right. On the left side of the small piston that is attached to the left firing toggle on top of the control column there is a neatly cut end of a piece of pipe. There is a loose cable-tie round the shaft of the control column.

In a letter written by Warneford, he recorded that he led a recovery party from the 3 Squadron AFC aerodrome to map reference [map scale 1:40,000] Sheet 62D, grid J19 b 44, where they were in full view of the enemy. The party recovered von Richthofen's body, his left flying overboot (RELAWM00705) and this control column.

Warneford was born in Liverpool, England on 3 February 1883 and was a military instructor on enlistment in the 1st Light Horse Regiment on 26 September 1914. He had previously served for two years with the 7th Queen's Own Hussars during the Boer War before immigrating to Australia where he became a permanent staff officer.

He embarked for overseas service with the service number 41 and rank of staff sergeant major aboard HMAT Star of Victoria on 20 October, arriving in Egypt on 8 December. Proceeding to join the Mediterranean Expeditionary Force on 5 April 1915, Warneford landed with the 1st Division Headquarters at Gallipoli on 25 April. At some point his service number was changed to 136. He was promoted to the rank of warrant officer and transferred to General Birdwood's General Staff on 1 May.

Admitted to No 1 Stationary Hospital, Lemnos with chronic appendicitis on 28 July, Warneford was eventually transferred to hospital in Cairo on 9 August. Invalided back to Australia aboard HMT Euripides on 29 August, Warneford rejoined the AIF after a period of convalescence as a member of the 53rd Battalion, 7th Reinforcements on 20 May 1916.

Embarking as a second lieutenant aboard HMAT Ascanius on 26 October, Warneford disembarked at Devonport, England on 28 December. He was appointed signalling officer to No. 3 E Group on 12 January 1917 where he remained until August when he transferred to the 30th Training Squadron, AFC.

Proceeding overseas to France in March 1918 Warneford was taken on strength by 3 Squadron on 1 April. He sustained a fractured nose in an accident on 13 August when he was an observer in an RE8 aircraft piloted by Lieutenant Roderick Charles Armstrong. Armstrong was attempting to take off after a forced landing but before he could gain sufficient speed to leave the ground, the machine struck a shell hole. Warneford was thrown against the gun mounting, fractured his nose and was admitted to 20 Casualty Clearing Station.

Returning to his unit Warneford remained with 3 Squadron until the end of the war. He returned to Australia aboard HMAT Barambah embarked on 3 September 1919. He disembarked in Melbourne on 25 October with his appointment in the AIF terminated on 2 January 1920. Warneford died on 20 April 1951.