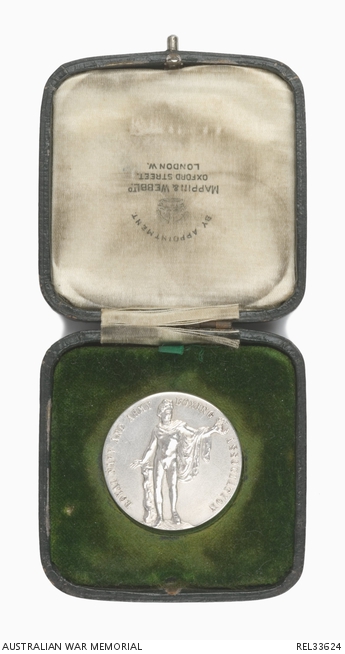 Silver medallion in a black case lined with green velvet. The obverse of the medallion shows a classical Greek figure holding a laurel wreath aloft. Around the edge are the words 'ROYAL NAVY AND ARMY BOXING ASSOCIATION'. The reverse has a laurel wreath around the rim which surrounds the engraved words: '5TH ARMY INFANTRY SCH. JULY 1917 N.C.O'S. LIGHT WT. 1ST PRIZE CSM O. WILLIAMS 9TH BATT. A.I.F.' Beneath this are silver hallmarks.

This medallion for boxing was won by Company Sergeant Major Oswald Williams in July 1917. Williams, a clerk from Brisbane, enlisted in the AIF on 23 August 1914, aged 28. He was assigned the number 617 and the rank of private in 9 Battalion. He embarked for service overseas aboard HMAT Omrah which sailed from Brisbane on 24 September that year.

He was promoted to Lance Corporal on 18 April 1915 and was wounded in the left foot during the Gallipoli landings on 25 April. He was hospitalised but rejoined 9 Bn in July. He was promoted to Corporal on 12 December 1915 and after the evacuation of Gallipoli sailed for service on the Western Front. He was promoted to Sergeant on 18 March 1916. He received a severe gunshot wound to his chest and arm on 31 May . After recuperating in England he rejoined his unit in France in October. He was again promoted, to Company Sergeant Major, on 23 February 1917. On 20 October that year he suffered gunshot wounds to his forehead and was again sent to England. He rejoined 9 Bn in France in February 1918 but was transferred to a headquarters unit in England in August.

He embarked for return to Australia, with the rank of Warrant Officer Class 2, on 15 September 1918. He worked as a clerk and inspector for the Brisbane City Council and died on 8 June 1938.