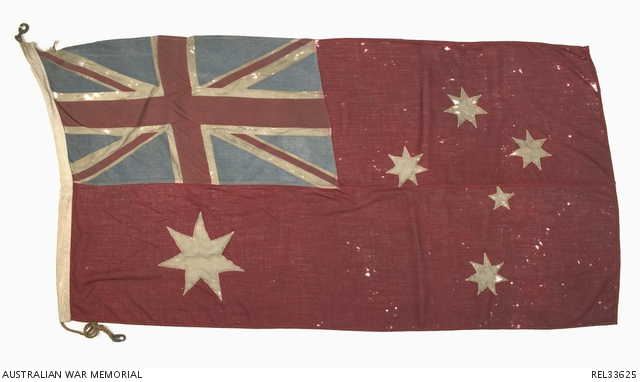 Australian red ensign with inset stars and a printed Union Jack in the upper left canton. The flag is made of wool bunting with a canvas and sisal rope hoist and brass inglefield clip. Written on the Union Jack is 'R H Walker' and some other illegible signatures.

This flag was carried by members of 36 Infantry Battalion Association, at Anzac Day marches in Sydney from the early 1920s. It was given to the Association soon after the First World War by the Wives and Mothers Auxiliary. The flag was laid up with the battalion's Regimental Colours at St Oswald's Anglican Church in Haberfield, Sydney in the late 1930s. When this church was sold in 2000 the Colours only were transferred to another Sydney church and the flag was eventually passed to the War Memorial in Canberra.