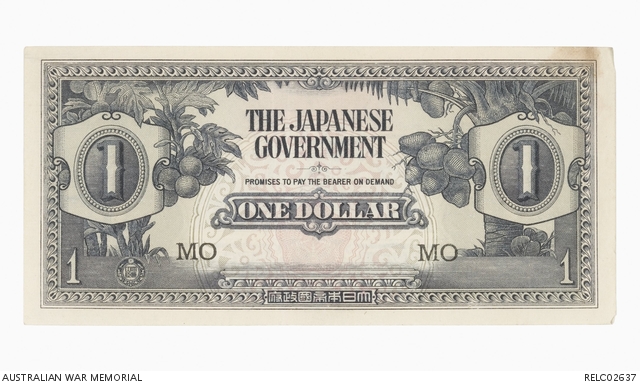 Japanese Invasion Money one dollar note for use in Malaya, series MO. The note is uncirculated and has a small stain in the top right hand corner of the obverse.

This note was sent from NX102964 Corporal Reginald Roy Rattey to his friend, Martin Blackstock during the Second World War. Martin later gave the note to his younger brother, Bernard. Reginald Rattey was born in Barmedman, New South Wales on 28 March 1918. He enlisted on 24 September 1942 in Barmedman. While holding the rank of corporal, Rattey was awarded the Victoria Cross on 22 March 1945 'for conspicuous gallantry at Buin-Road'. He had silenced enemy fire from automatic weapons in bunkers, which were dominating all lines of approach to a strongly held position next to Buin Road, South Bougainville, and holding up the company's advance. Rattey was discharged on 31 October 1945.