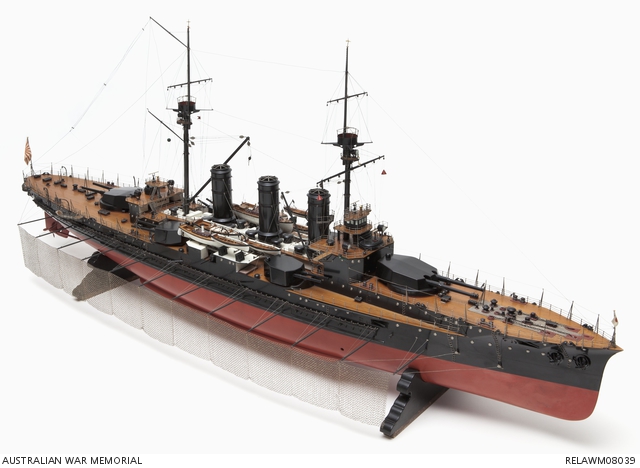 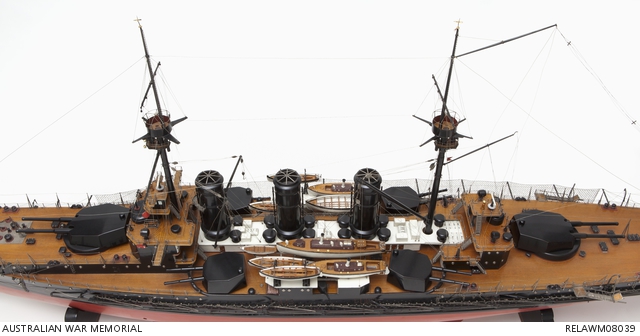 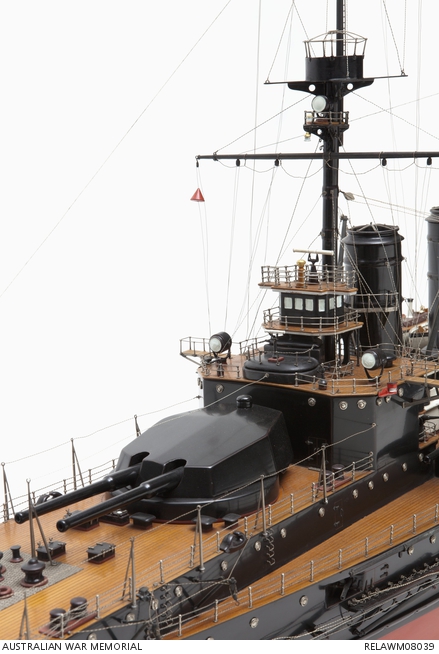 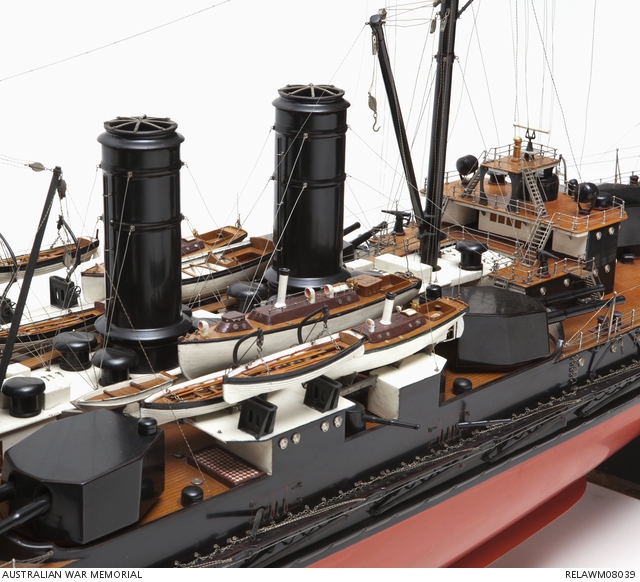 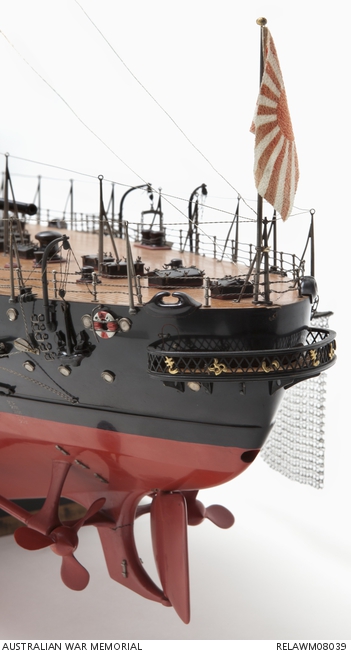 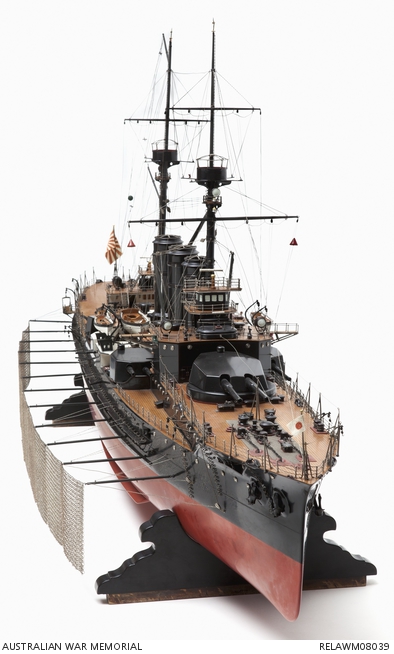 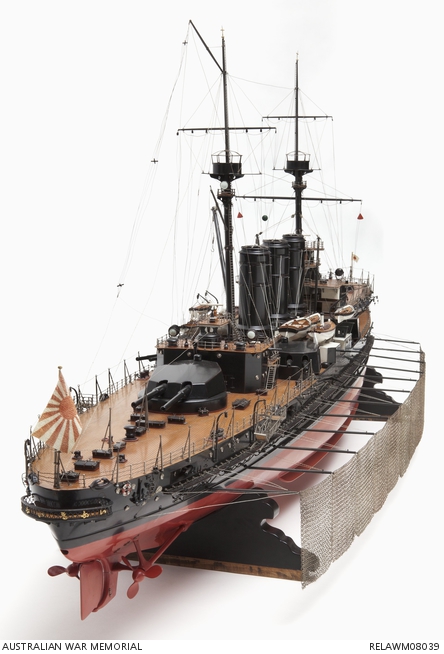 Model of the Japanese battle cruiser 'Ibuki' in approximately 1:96 scale, constructed from material salvaged from the original ship and built at Kure, Japan. Finished in black and red laquer and depicted with starboard anti-torpedo skirts deployed.

A 1:96 scale model of the HIJMS battle cruiser 'Ibuki'. The original ship was built at the Kure Naval Arsenal, Japan and launched on 31 October 1907. With a crew of 844 and armament comprising four 305 mm guns, eight 203 mm guns, fourteen 120 mm guns and four 80 mm guns, the Ibuki was a powerful battle cruiser capable of 21 knots. The ship saw service during the First World War protecting allied shipping and troop convoys in the South Pacific and Indian Oceans, but was required to be sunk under the terms of the 1922 Washington Naval Treaty. A number of items were stripped off the ship prior to its sinking.

This model of the Ibuki was made in 1925, following a number of direct representations throughout 1924 from the Australian War Memorial to Japanese Naval authorities. Requests were made via both the Australian Prime Minister and directly to Admiral Saito, the commander of the Japanese Training Squadron which visited Sydney in January 1924, for relics of the 'Ibuki' (suggestions included a ship's wheel, bell or flag). The Japanese responded in January 1925 by instructing their Ministry of Marine to construct 'a small model of the 'Ibuki' and a cigar box to be made of wood from the ship'. The model was delivered by the SS 'Mishima Maru', arriving in Sydney on 8 June 1925. In his speech at the handover of the model on 12 June 1925, the Japanese Acting Consul-General, Mr Yamasaki, stated he hoped the gift would be accepted 'as undeniable evidence that the same friendly and cordial relations will remain unchanged between the Commonwealth and Japan, and are as strong as when the 'Ibuki' conveyed the brave Anzacs to the battle front, there to gain imperishable renown for their patriotism and courage. I feel confident that the action of Japan in this instance will counterbalance and set-off some of the unkind words which misinformed people occasionally indulge in regarding the intentions of Japan towards Australia'.

The model was made at the Naval Dockyards at Kobe from wood and other material salvaged from the 'Ibuki' after it was scrapped. A newspaper report of the ceremony mentions that 'a similar model was presented to New Zealand through the Government agent, Mr W.R. Blow'. The model was publicly exhibited in Sydney at the Memorial's exhibition centre at Prince Albert Park. The Ibuki's wheel (see RELAWM08238) and one of the ship's bells (see RELAWM08239) were delivered to HMAS Brisbane on the occasion of that ship's visit to Yokohama, Japan in May/June 1925, and were landed at Sydney in late November 1925. They joined the exhibit at Albert Park. All three relics remained on display in Sydney until the centre closed in 1935 when they were moved to the new building in Canberra. The model has been on regular display since the opening of the Australian War Memorial in 1941.

The sister model to this example, presented to the New Zealand Government, is currently held at the Museum of New Zealand Te Papa Tongarewa in Wellington.

Inspection of the model by the Australian War Memorial's conservation staff reveal that the black surfaces of the model appear to be finished in black lacquer. The solid hull is made from several blocks of wood glued together and shaped. While the model uses commercially available after-market alloy shop model accessories such as davits, port holes and ladders, a number of features are unique and hand-made, such as the torpedo nets which are constructed from individual tinned copper wire ring-links. The stored life buoys are mounted behind brass cages, replicating the feature on the real 'Ibuki'. The deck finish has been carefully incised to replicate individual planking.

The model is designed to be displayed with the starboard side of the ship to the viewer, as the torpedo boom net configuration differs on each side - the starboard side is deployed, while the port side is stored. The scale used in the making of this model - 1:96 (or 1/8 inch to the foot) - was a standard adopted by British shipyards in the late 19th century for the manufacture of builder's models. Because of its widespread use, this scale was also adopted by modellers and commercial suppliers of aftermarket accessories.