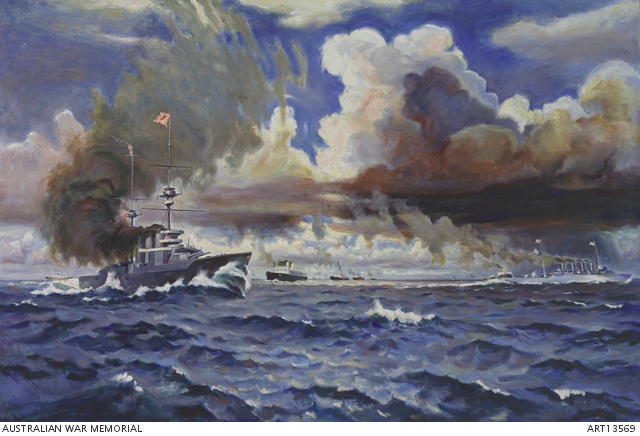 HIJMS Ibuki with HMAS Melbourne escorting the first Australian and New Zealand convoy in the Indian Ocean 1914. When HMAS Sydney was detached from the convoy to join battle with an enemy ship near the Cocos Islands, HMAS Melbourne was in charge of the convoy. On the 9 November, the Sydney reported having sighted an enemy cruiser, which proved to be the SMS Emden. The Melbourne immediately took station on the convoy's exposed starboard flank and signalled the Japanese cruiser Ibuki to join her there for added protection. The Ibuki had also heard the Sydney's report and at once had hoisted her battle-flags, cleared for action and started at full speed in the direction of the Emden. But the safety of the convoy was paramount and the Japanese ship had to be recalled to her allotted station. Later that morning come news of the destruction of the Emden. The painting was presented to the Commonwealth of Australia by the Japanese shipping line Osaka Syosen Kaisya through the Japan-Australia Society on 1 November 1939. In a speech at the presentation of the painting, Sir Thomas Gordon stated that the painting was "offered as a gesture of friendship and sympathy...". In response, Mr M. Akiyama (Consul-General for Japan) stated that the presentation of the painting to Australia be viewed "not as a medium of boasting of the services of the Japanese Navy but as an emblem of the dawn of the day when our two nations in the Pacific will be more closely related to each other."