Some of the survivors of Dutch troopship HMT Nieuw Zeeland, a former passenger and cargo ship, ... 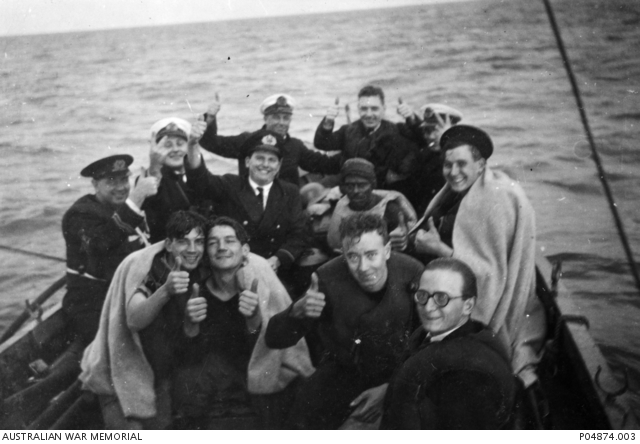 Some of the survivors of Dutch troopship HMT Nieuw Zeeland, a former passenger and cargo ship, after it was torpedoed at 11.45 am by one of four torpedoes fired by German U-boat U-380 about 80 miles from Gibraltar in the Mediterranean Sea and sank following a further torpedo at 13.08 hours. The ship was returning from the Operation Torch, the Allied invasion of North Africa and carried 214 crew members, 29 gunners and 13 service passengers. The survivors were picked up by HNMS Isaac Sweers (G 83) and HMS Porcupine (G 93) and landed at Gibraltar. There were only 21 casualties. The last person off the Nieuw Zeeland was the ship's captain and he brought his dog with him on the rescue boat.