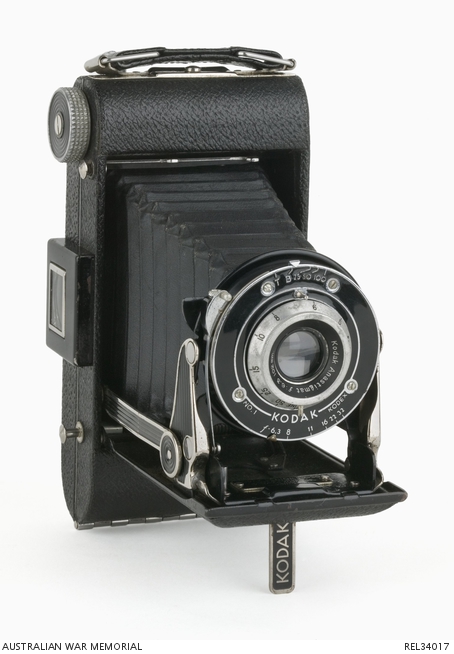 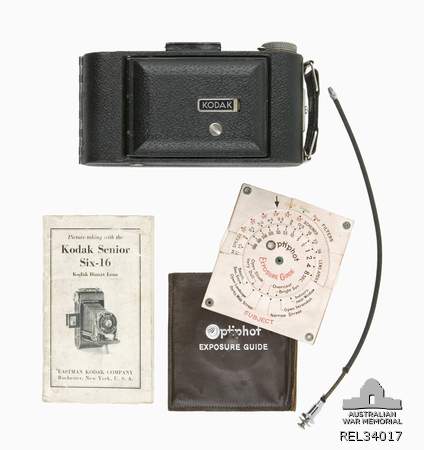 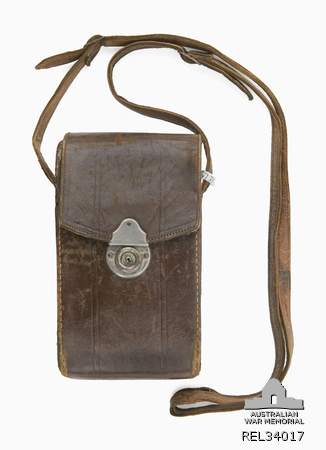 Kodak Six-16 folding camera in original leather carrying case, with instruction booklet issued by the Canadian Kodak Company, self -portrait shutter cable release and an 'Optiphot Exposure Guide' in a leather storage envelope. The leather case is lined in green felt, fitted with a spring latch which is marked 'Made in Czechoslovakia' and provided with a 10 mm wide leather carrying strap. The camera is bound in black leatherette and is provided with a small leatherette carrying handle. Pushing a button adjacent to the winding knob releases the bellows-type Kodak Anastigmat 6.3/102 mm lens which folds out and engages a pair of struts. The maker's name appears on a plate located just under the lens. A paper label attached to the inside of the film carrier door states 'USE KODAK FILM / VERICHROME V 620'. The carrying case also contains: 1) a small 130 x 80 mm, 32 page black and white booklet entitled 'Picture taking with the / Kodak Senior / Six-16 / Kodak Bimat Lens'; 2) a square card 'Optiphot' exposure guide with a revolving wheel and a viewing window, each corner rivetted, with instructions on the reverse, contained in a square brown leather envelope with the title silver-stamped and 3) a 260 mm long cloth bound shutter cable with stainless steel fittings at each end.

This camera was used by W/1235 Signalman Colin Raymond Donaldson, RAN to take the only known images (now in the War Memorial's collection) of the sinking of the 11,000 ton troop transport HMAT Nieuw Zeeland, which was torpedoed by U-boat U-380 at about 11.45 am on 11 November 1942 just off the north Moroccan coast. The ship was returning from Operation 'Torch', the Allied invasion of North Africa. The survivors - 241 of a total of 256 - were picked up by HMS Isaac Sweers (G 83) and HMS Porcupine (G 93) and landed at Gibraltar. Colin Donaldson, born Widderburn, Victoria on 26 April 1920, enlisted in the RAN on 4 September 1939 and served until 29 July 1945. He had joined the Nieuw Zeeland at Port Melbourne on 1 October 1940 and served as a signaller on that ship until its sinking; he recalls that because he worked on the bridge, he left the sinking troopship with the captain and thus their lifeboat was the last to cast off. Donaldson distinctly remembers the Captain climbing down the rope ladder with his pet cocker spaniel in his arms. The German U-boat delivered a coup-de-grace torpedo just after 1.00pm and Donaldson says 'we rowed as fast as we could to get away from the suction as the ship sunk'. Donaldson's wife Bev later related that her husband used to row furiously in his sleep for many years after the incident. Donaldson later served in the 150 ton yacht Laurabada in New Guinea waters. The Laurabada had formerley served as the yacht of the Administrator of Papua and was transferred from civil control to the RAN on 14 February 1942. It was paid off and returned to the Department of External Territories in June 1945.