Iroquois helicopters and crewmen from No 9 Squadron, line up on Luscombe Field, at the 1st ... 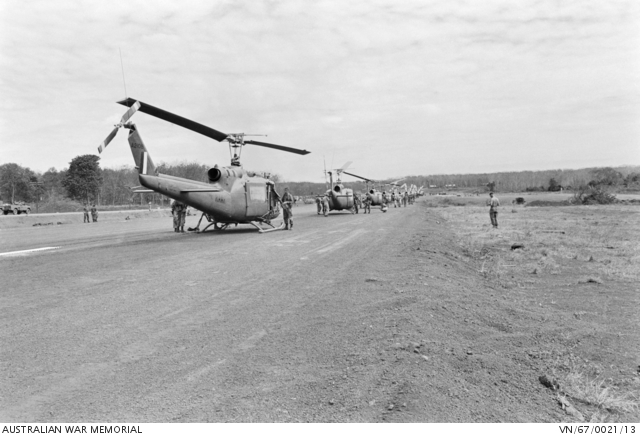 Iroquois helicopters and crewmen from No 9 Squadron, line up on Luscombe Field, at the 1st Australian Task Force (1ATF) Headquarters, near Vung Tau, South Vietnam, before launching their first airborne assault in the initial stages of Operation Bribie. No 9 Squadron inserted men from A and B Company, 6th Battalion, The Royal Australian Regiment (6RAR), into a landing zone east of Hoi My, to establish a blocking position and prevent the withdrawal east of the Viet Cong (VC) D445 Battalion that had unsuccessfully attempted a major ambush on Route 44, between Dat Do and Phuoc Hai on the night of the previous night. Five RAAF Iroquois helicopters took part in this operation, including UH-1B Iroquois A2-1019, which is now part of the Australian War Memorial’s collection, is the last helicopter in line, closest to camera.