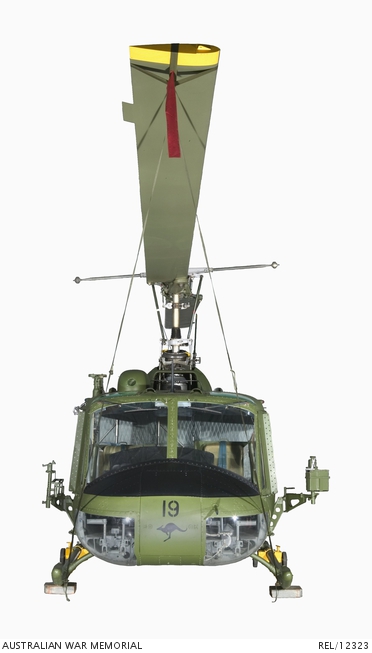 The Bell UH-1B Iroquois medium utility helicopter is a turboshaft-powered machine with two-blade main rotor and tail rotor. The aircraft is built primarily from alloy. The original US serial number was 63-13587, and the aircraft was allotted RAAF serial number, A2-1019. The aircraft generally carried five fully armed troops or equivalent weight in cargo and was operated by a crew of up to four in Vietnam service. Armament was two M60 machine guns, with one positioned on a flexible mount on each side of the cabin.

This Bell UH-1B Iroquois Helicopter was issued to 9 Squadron (Sqn) at RAAF Fairbairn, Australian Capital Territory (ACT), in October 1964. In May 1966 the aircraft was flown from Fairbairn to RAAF Richmond, New South Wales and then transported via troopship HMAS Sydney to Vung Tau, Vietnam, arriving on 6 June 1966. It was used by 9 Squadron in operational duties and completed 489 operational missions (and a far larger number of sorties or flights) including medical evacuations, troop transport, liaison and other duties. While on operations on 13 April 1967 the aircraft crash landed following an engine failure and was airlifted by a United States Army Chinook helicopter to Vung Tau. On 22 September 1967 the aircraft returned to operations following extensive repairs which included the replacement of the tailboom. It returned to Australia in October 1968 and was issued to 5 Squadron at RAAF Fairbairn. From 1975-1979 the aircraft was used at RAAF Williamtown, NSW, and later issued to No 2 Flying Training School at RAAF Pearce, Western Australia (WA), where it was used in Search & Rescue Operations. On 21 May 1985 it was flown by Wing Commander Mick Haxell DFC to the Australian War Memorial and presented to the Memorial by Air Marshal Evans AC DSO AFC. This aircraft was stored at Fairbairn from 21 May 1985 until 18 May 1988 when it was transported to AWM Mitchell store. It is currently on display in the Vietnam Gallery.