A view across a door gunner's M60 machine gun as Iroquois helicopter crews from No 9 Squadron ... 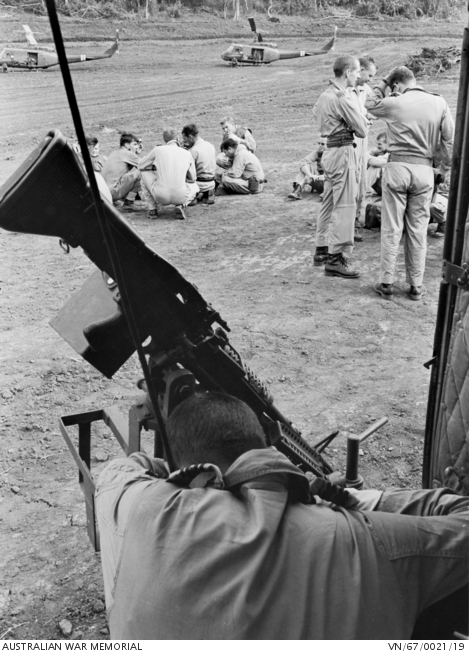 A view across a door gunner's M60 machine gun as Iroquois helicopter crews from No 9 Squadron wait on standby at Luscombe Field, near Vung Tau, South Vietnam, after their initial airborne assault in the opening stages of Operation Bribie. No 9 Squadron inserted men from A and B Company, 6th Battalion, The Royal Australian Regiment (6RAR), into a landing zone east of Hoi My, to establish a blocking position and prevent the withdrawal east of the Viet Cong (VC) D445 Battalion that had unsuccessfully attempted a major ambush on Route 44, between Dat Do and Phuoc Hai on the previous night. The crews are ready to resupply, evacuate casualties, fly in more troops or bring the soldiers back. The aircraft in the background are US helicopters.