Iroquois helicopters and crewmen from No 9 Squadron, wait on standby at Luscombe Field, near Vung ... 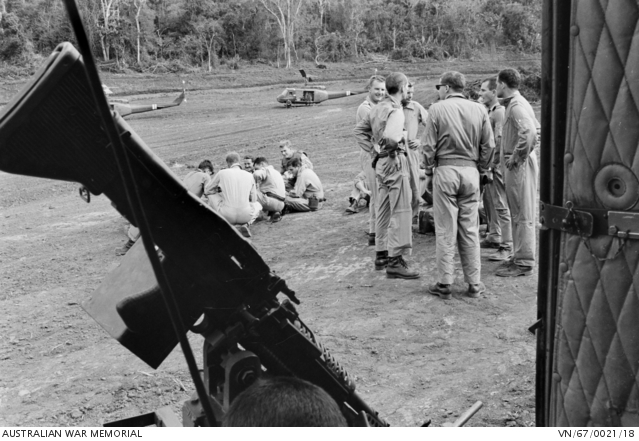 Iroquois helicopters and crewmen from No 9 Squadron, wait on standby at Luscombe Field, near Vung Tau, South Vietnam, after their initial airborne assault in the opening stages of Operation Bribie. No 9 Squadron inserted men from A and B Company, 6th Battalion, The Royal Australian Regiment (6RAR), into a landing zone east of Hoi My, to establish a blocking position and prevent the withdrawal east of the Viet Cong (VC) D445 Battalion that had unsuccessfully attempted a major ambush on Route 44, between Dat Do and Phuoc Hai the previous night. The crews are ready to re-supply, evacuate casualties, fly in more troops or bring the soldiers back. In the foreground is the helicopter’s M60 machine gun.