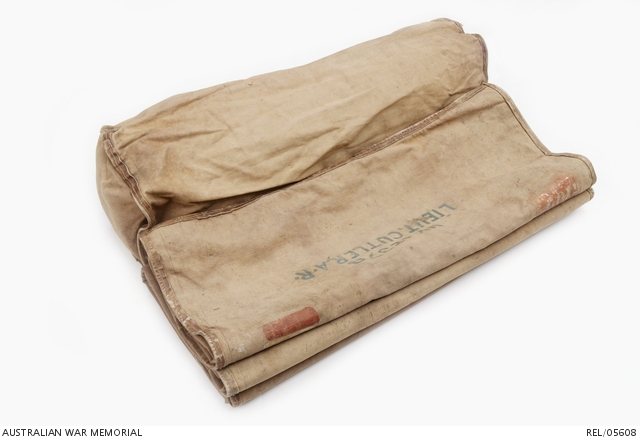 Private purchase brown canvas bed roll with an olive green waterproof lining and round ended pocket at the head to hold a pillow or spare clothing that would substitute as one. The two fabrics are held together with a leather binding and the roll secured with two leather straps. The outside is marked in blue/black paint '216 NX12378 LIEUT. CUTLER, A.R.' and bears the unit's colour bars for transport.

Born in 1916, Arthur Roden Cutler saw pre-war service in the Citizen Military Forces with the Sydney University Regiment. On 1 May 1940 he enlisted in the Second AIF as NX12378, and was posted as a Lieutenant to 2/5 Australian Field Regiment (7th Division). He was awarded the Victoria Cross for actions between the 19th of June and 6th July 1941 in the Merdjayoun-Damour area of Syria. As a result of wounds suffered in the last of these actions, at Damour on 6 July, his right leg had to be amputated. After his return to Australia in late 1941, Cutler held a variety of appointments including; High Commissioner to New Zealand 1946-52, High Commissioner to Ceylon 1952-55, Australian Minister to Egypt 1955-56, High Commissioner to Pakistan 1958-61, Australian Consul-General in New York 1961-65 and Australian Ambassador to the Netherlands in 1965. In December 1965 he was created Knight Commander of St Michael and St George, and in January 1966 he was sworn in as Governor of New South Wales, a position which he held with distinction until his retirement in 1981, at which time he was created a Knight of the Order of Australia.